A screenshot shared on Facebook in South Africa claims that the BBC, the United Kingdom’s national broadcaster, bowed to pressure from Israel and removed its Middle East correspondent Jeremy Bowen from Gaza. According to the post, the veteran journalist was pulled out for reporting that he had not seen any evidence of Hamas using Palestinians as human shields. However, the BBC has made no such move; the screenshot is fabricated and has circulated online since 2014. Bowen continues to report for the BBC from Gaza. 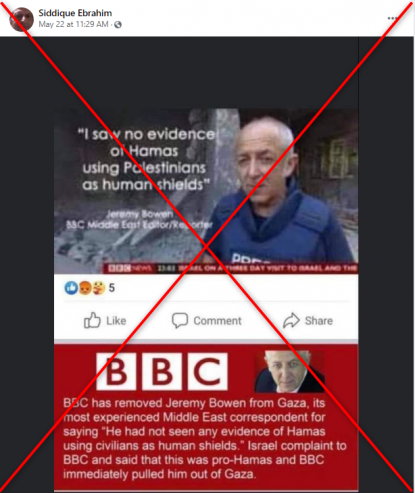 According to the text of the post, which was designed to look like a screenshot from the BBC, Israel complained to the British broadcaster that Bowen's comments were pro-Hamas and "BBC immediately pulled him out of Gaza".

Bowen, who is BBC’s Middle East Editor, wrote an article in the New Statesman in 2014 saying that he had seen “no evidence” of Hamas using human shields in Gaza.

However, the claim that BBC pulled Bowen from the region is false. The fabricated screenshot has been circulating for several years.

An internet search revealed that the fabricated screenshot has been online since 2014.

In August 2014, BBC published an article titled: “#BBCtrending: Jeremy Bowen and the Twitter conspiracy.” In the article, the news organisation distanced itself from the screenshot, confirming that it was fake and that Bowen was still working as a journalist in Gaza.

The BBC article says that the reporter did not appear onscreen for a few days as he was on holiday, and a rumour started circulating that the news organisation had pulled him out of the region in response to a complaint from Israel.

At the time, Bowen had just published the above-mentioned article in the New Statesman.

In 2018, the same screenshot resurfaced online prompting Bowen to respond in a tweet.

“It’s fake news. Someone has used the BBC logo as part of a deception. The BBC has supported my reporting consistently and well for more than 30 years. It did not pull me out of Gaza against my will - or anywhere else for that matter,” wrote Bowen.

Just one day after this screenshot resurfaced yet again on May 22, 2021 -- following renewed violence in the region -- the BBC published an article on the conflict signed by Bowen.

In May 2021, violence erupted in Gaza between Israel and armed military groups, primarily Hamas. The 11-day conflict halted after a ceasefire brokered by Egypt that took effect on May 21, as AFP reported.

Israeli military strikes on Gaza killed more than 250 Palestinians and wounded over 1,900 people, the health ministry in Gaza said. Rockets and other fires from Gaza took 12 lives in Israel, medics say. More than 350 people in Israel were wounded.