Social media posts claim that US comedian Bob Saget died because he had received a Covid-19 booster shot. These claims are unsubstantiated; the "Full House" star had said that he received a third dose of the vaccine, but the Florida medical examiner's office that conducted his autopsy has not released its findings, nor indicated that vaccination was responsible for his death.

"Bob Saget died of vaccine poisoning tonight don't let anybody tell you different. The vaccines are poison," claims a tweet shared on January 9, 2022, hours after the announcement of the 65-year-old comedian's death.

The tweet included a video excerpt from the December 13, 2021 episode of Saget's podcast "Bob Saget's Here For You," in which he jokingly tells a person on the phone that he had a Covid-19 booster shot earlier that week, but received it in the backside rather than the arm. 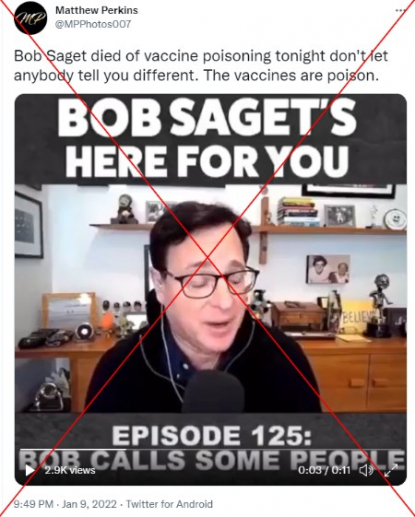 Despite the humorous tone, many online users in the United States and Canada chose that video snippet to suggest Saget's vaccination status was related to his death.

The actor, often heralded as "America's dad," was found dead on January 9 in a Florida hotel room, the Orange County Sheriff's office said.

However, nothing suggests that the television star and stand-up comedian's death is an adverse event related to the Covid-19 vaccine.

After Orange County police deputies found Saget unresponsive in a room in Orlando's Ritz-Carlton hotel, the county sheriff's office announced in a statement to the press that "detectives have found no signs of foul play or drug use in this case."

Saget's body was taken to the county's medical examiner's office, which did not report a vaccine-related death.

"An autopsy was performed this morning on Robert Lane Saget," Joshua Stephany, Chief Medical Examiner, said in a statement. "The cause and manner of death are pending further studies and investigation," he said, adding it could take up to 10-12 weeks to complete.

Saget joked about booster shots on Twitter in the past, but it appears the actor did get one around the end of 2021. "I just got my booster," Saget said in a serious tone earlier in his December 13 podcast. "I don't know what it's worth because a new variant comes out every 10 minutes, but what the hell, I'm gonna go make people laugh."

Saget also shared his experience with Covid-19 infection on a radio show on January 5, 2022. "It is not good, it does not feel good, I had it," he said, adding he was not sure whether he had had the Delta or Omicron variant.

Saget is the latest public figure targeted by claims that the Covid-19 shots contributed to their deaths, including actress Betty White and former secretary of state Colin Powell.