Skip to main content
Flowers, candles and mementos cover the star of late US actress Betty White on the Hollywood Walk of Fame, December 31, 2021 in Hollywood, California ( AFP / Robyn Beck)

Social media posts claim that five-time Emmy award-winning actress Betty White died a few days after receiving a Covid-19 vaccine booster, suggesting that it caused her death. This is false; one of White's agents says she had not received a booster, and a media outlet that some posts tied to an alleged quote about the star getting the shot says it is fake.

"That third jab was the charm. Boosted on the 28th, dead on the 31st. Getting jabbed at all is like playing Russian Roulette with a Glock 17, a 9mm," says a January 2, 2022 Facebook post.

It attributes the following quote to White: "Eat healthy and get all your vaccines. I just got boosted today.” And the post includes a link to a story from Crow River Media, implying that the information came from the Hutchinson, Minnesota outlet. 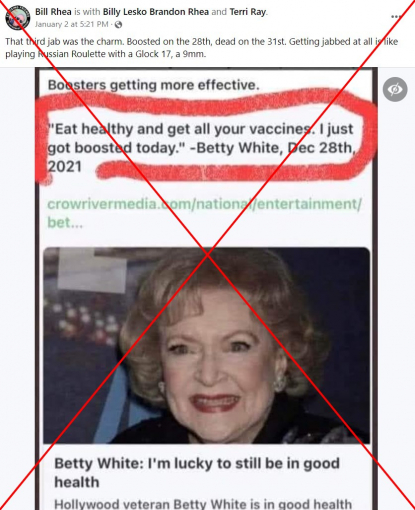 Vaccine-related claims about "Golden Girls" star White -- who died on December 31, 2021, just shy of her 100th birthday -- also appeared on Facebook here and here, on Instagram here, and on Twitter here and here.

White's talent agent told AFP that the claim is false.

"There is no truth to these statements," said Jeff Witjas. "Betty never had the booster and passed away from natural causes."

"Betty White did not say she received her booster shot on Dec. 28," it said, adding that the outlet did not publish an article claiming so.

"Anyone willing to put in a few minutes of reading and research, could quite easily determine that the quote was fake."

The US Centers for Disease Control and Prevention recommends boosters to counter the decline over time in protection offered by Covid-19 shots.

AFP Fact Check has debunked many claims about Covid-19 and vaccines.