A video has been viewed tens of thousands of times in social media posts that claim it shows US President Joe Biden admitting his predecessor Donald Trump was "still president". But the clip had been misleadingly edited. It was taken from a longer video which shows Biden making the remark as part of a joke about Republicans disputing his 2020 election victory over Trump. 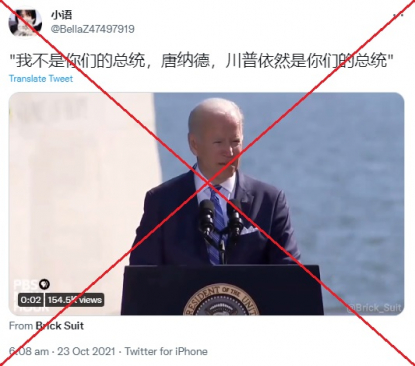 The video was shared in similar posts here, here and here.

But the official White House video and transcript of Biden's full speech -- given on October 21 in Washington DC -- shows he made the remarks in jest.

Discussing the issue of voting rights, Biden said: "We got a long way to go though. It's using authorities to challenge the onslaught of state laws undermining voting rights, whether in old or new ways.

He then made the sign of the cross as the crowd laughed.

His remarks appear to refer to baseless allegations made by Trump that there was mass fraud in the 2020 presidential election.