A clip from the Australian TV show "Media Watch" has been shared repeatedly in social media posts that claim it revealed how actors posed as Covid-19 patients in a hospital in Sydney. The claim is false: the clip has been edited from a longer report that actually debunked rumours about the "crisis actors" and showed that they were genuine Covid patients.

"Why do they need actors for this stuff…maybe ask yourselves that question?" reads part of a Facebook post from October 9, 2021.

The posts shows a clip from an episode of "Media Watch", an Australian TV show that covers the news industry. It is hosted by Paul Barry. 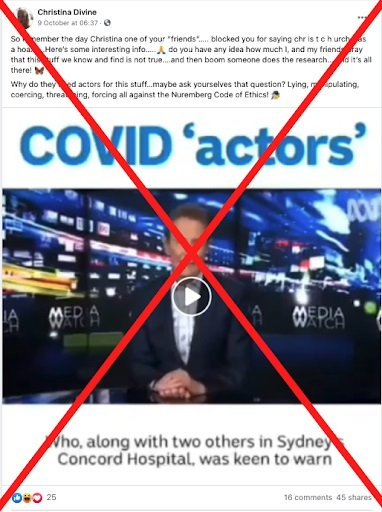 The campaign featured testimonies from three patients at Sydney's Concord Hospital talking about their fight with Covid-19. The testimonies were filmed by Dr Lucy Morgan, a respiratory specialist at the hospital.

"But soon, people on social media were wondering if the New South Wales Health video was actually a fake," Barry said.

"Yes all three, including Ramona, were supposedly paid crisis actors, who did not have Covid at all," he said, referring to one of the patients featured in the campaign.

Social media has become awash with false claims about actors posing as patients or medical workers during the pandemic, pushing the widely-debunked narrative that the crisis does not exist.

Similar extracts from the "Media Watch" report were shared here and here.

However, the footage in these posts has been misleadingly edited.

In the full "Media Watch" report, Barry went on to debunk claims that the people in the campaign were actors.

"So is Ramona a crisis actor pretending to have Covid for New South Wales Health? No, of course she's not," he said.

Social media posts claimed that Ramona was in fact an actor called Ramona Khoury, citing a photo of a similar-looking woman on a talent website.

However, Barry pointed to a media release from New South Wales Health which named the woman as 30-year-old pharmacy worker Ramona El-Nachar -- not Ramona Khoury.

"As you can clearly see, they are two different people," he said. 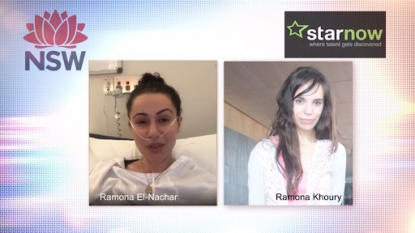 A screenshot of an image comparison featured in the Media Watch segment showing Ramona El-Nachar (L) and Ramona Khoury (R).

In another case of mistaken identity, social media users believed they had tracked down another actor featured in the NSW Health campaign called Mitch Garling, also found on Star Now. They accused him of pretending to have Covid-19.

But Media Watch said that Garling had not posed as 35-year-old patient Osama Ahmad and played this Instagram video in which the actor debunked the claims.

“Look, I am an actor… but not pretending to have Covid. Not that. It doesn’t even look like me, he has a beard, that's it,” Garling says during the video.

New South Wales Health said in a statement that staff at Concord Hospital's intensive care unit had received "multiple intimidating phone calls from members of the public" over the "baseless" allegations.

"It has been highly distressing for Dr Morgan and the patients to see their powerful messages undermined by these baseless and dangerous accusations and to have their credibility questioned," it said.

"The reason we did the story in the first place was to kill off this idiotic suggestion... It’s an insult to Concord Hospital and the brave patients who spoke out about the reality of contracting Covid-19," he told AFP.

AFP found no false claims circulating online about a third patient featured in the video.