Social media posts suggest the impact of the Covid-19 pandemic is being exaggerated, claiming that a Canadian hospital has mannequins in its beds instead of patients suffering from the disease. But the posts feature an image of Canadian Broadcasting Corporation (CBC) footage that was recorded in a training center, not a hospital.

"If they are complaining about overwhelmed ICU's, then how about start off by removing the mannequins from the beds? We are in quite the 'pandemic,'" says an October 11, 2021 Instagram post that includes the image showing a report by CBC Edmonton. 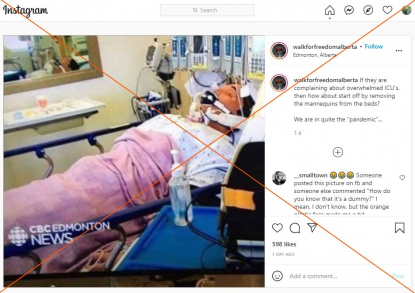 The posts were shared as Alberta battles an influx of Covid-19 patients in its hospitals, placing a strain on the provincial health care system.

But claiming that mannequins are taking the place of real Covid-19 patients is incorrect.

"On October 1st and 2nd, CBC Edmonton ran two stories describing the realities of being in an ICU ward and the strain on nursing staff. Unable to bring our cameras into a hospital ICU ward, we shot footage at two training facilities which was then used for illustrative purposes," Chuck Thompson, head of public affairs for CBC, told AFP.

In the October 1 segment -- available here -- the setting of the footage "was not clearly identified as training footage and it should have been. We have since clarified that," he said.

An October 11 editor's note said the footage was recorded in September 2021 "at training facilities at the Northern Alberta Institute of Technology and MacEwan University, where students learn using realistic hospital simulations."

This was confirmed by Nicole Graham, a spokeswoman for the Northern Alberta Institute of Technology. She said that a CBC crew shot footage in the Centre for Advanced Medical Simulation for a story about the state of ICUs in the province.

"Mannequins were used to demonstrate what patients and healthcare workers in the ICU are dealing with as this type of simulation cannot be done with a live actor. Media are generally not permitted into actual ICUs to gain the imagery they were looking for as it relates to this story," she said.

And a statement from MacEwan University said that some footage featuring Dr Christy Raymond, dean of its Faculty of Nursing, was filmed at the school's Clinical Simulation Centre.

"The mannequin in the video is a highly realistic human patient simulator, an effective tool used to train students in preparation for careers in a variety of healthcare settings," the statement said.

Some of the footage of the mannequins was later used to illustrate an October 7 story about provincial Covid-19 projections, which has since been edited to remove it. 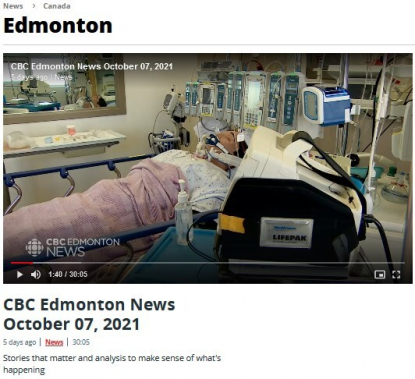 Screenshot taken on October 12, 2021 of a CBC Edmonton report

"In this context, the footage was used inappropriately, even for illustrative purposes, and we apologize for the error in judgement," Thompson said. 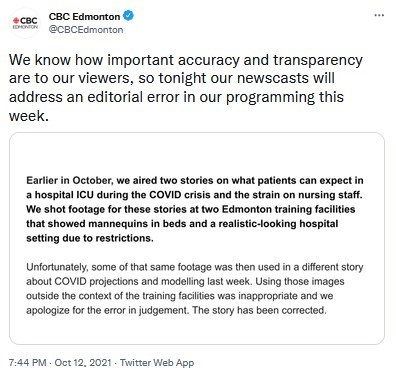 Similar images from a French language broadcast were shared in social media posts downplaying the impact of Covid-19 on hospitals in the province of Quebec. AFP Factuel reported that the footage was also shot in a special training zone for security reasons.