Vaccination cards are not required to get hired in South Africa

A Facebook post shared thousands of times in South Africa claimed that proof of Covid-19 vaccination was now compulsory for job seekers. But this is misleading: while some companies have introduced mandatory vaccination, this does not apply to all job seekers. The government said it would not force anyone to get the jab but instead encouraged voluntary inoculations.

“Va-cci-na-tion Card Is A New Job Requirement If You Are Seeking For Employment (sic),” it reads. 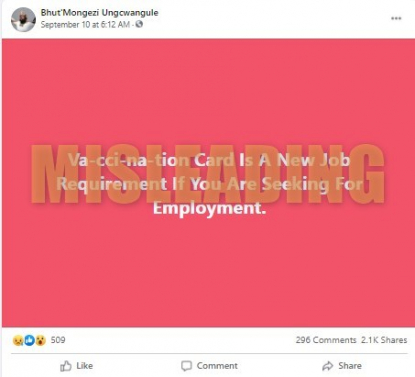 With the approval of Covid-19 vaccines, false claims about mandatory vaccination have circulated on social media, including in South Africa; AFP Fact Check debunked two of them here and here.

On June 14, 2021, South Africa’s employment and labour minister, Thulas Nxesi, issued a new directive that said “employers should find a reasonable resolution that accommodates all parties where employees refuse to be vaccinated for medical and constitutional grounds”.

The directive includes a three-step risk assessment that employers must conduct when deciding whether or not to enforce vaccination policies.

A screenshot of the three-step risk assessment from the labour department website, taken on September 27, 2021 ( South Africa Department of Employment and Labour / )

Some companies in South Africa have opted to make Covid-19 vaccinations mandatory for their employees, such as medical aid provider Discovery, private education group Curro and insurer Sanlam. All three offer some exceptions such as health and religious reasons. However, there has been no national decree to require Covid-19 vaccination for workers or for prospective employees.

Health Minister Joe Phaahla clarified the measures on September 17, 2021, explaining that mandatory vaccinations would not be adopted in the public sector and that the unvaccinated would not be denied any services.

“I want to emphasise that this certificate will not prevent people from accessing essential services, especially public services. You will not be required to show a certificate to get to the clinic. I have heard… [claims] that we want to deny people services,” he said.

“That is not going to happen. What this is meant for, is to say that you can open up more economic and recreational activities,” the health minister added.

He also noted that the government would not interfere with policies introduced by private employers as long as the policies are legal.

If the national government wanted to make vaccination against Covid-19 mandatory in South Africa, there are two laws they could invoke to do so, but this would also require court intervention, according to Bhekisisa Centre for Health Journalism. 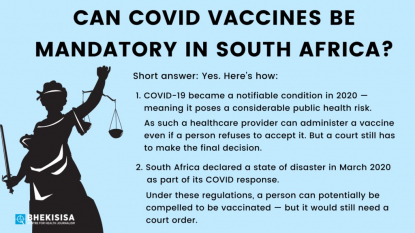 Screengrab of a graphic on Bhekisisa's website, taken on September 27, 2021 ( Bhekisisa Centre for Health Journalism / )

“Both these avenues have been used in the past to institute mandatory isolation and quarantine or even to enforce treatment for conditions that pose a significant public health risk,” wrote Safura Abdool Karim, a researcher and health lawyer for PRICELESS SA, the South African Medical Research Council Centre for Health Economics and Decision Science.

“But in the context of making Covid-19 vaccination compulsory, they are unlikely to be feasible options.”

Abdool Karim notes that South Africa’s basic education department already requires a child’s immunisation card showing that they have been vaccinated against preventable diseases such as polio and measles before entering Grade 1.

The department is also trying to introduce a policy that would prevent unvaccinated children from attending public schools.

At least 8.5 million of South Africa’s approximately 59 million residents have been fully vaccinated as of September 27, 2021.