Posts shared on Facebook claim that South Africa's President Cyril Ramaphosa told a G20 meeting that a Covid-19 vaccine would be mandatory and “everyone will have” it. This is false; Ramaphosa was actually asking leaders to ensure that all countries would have access to the new vaccines once they become available.

The claim was made in this Facebook post on November 21, 2020, and included a screenshot of a TV broadcast by South African news channel, eNCA.

The image shows South Africa's President Cyril Ramaphosa addressing the virtual G20 (Group of Twenty) Leaders’ Summit on the same day. The news ticker below reads: “Ramaphosa: All must get the vaccine”.

The caption on the post, shared more than 230 times, claims Ramaphosa said “you don't have a choice about whether you will or won't have the Covid-19 vaccine”.

“He has said that it will be mandatory and everyone will have the vaccine!” 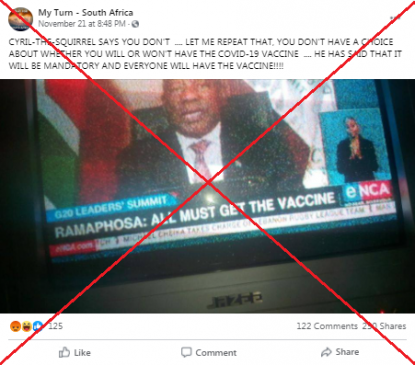 Similar claims were also shared here and here on Facebook.

A Google search of the sentence “Ramaphosa says all must get the vaccine” brought up an article, also by eNCA.

It recaps what Ramaphosa said during his address, with a key difference in the headline being the inclusion of the word “countries”, which more accurately encapsulates his speech and reads as follows: “All countries must get COVID-19 vaccine: Ramaphosa.” 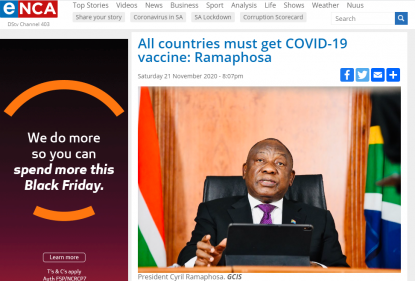 A screenshot of the eNCA news article taken on November 26, 2020

Within this online report, eNCA tweeted a video clip of the TV broadcast with its original headline.

President Cyril Ramaphosa has pleaded with G20 Leaders to ensure all countries have access to the #COVD-19 vaccine once it's available. The President was speaking at the virtual G20 Leaders' Summit. Courtesy #DStv403 pic.twitter.com/XdIH8eBdAZ

The South African president was addressing an online summit of G20 leaders on November 21, 2020, and had appealed to wealthier nations regarding the supply of Covid-19 vaccines.

“Another immediate task is to ensure that there is equitable and affordable access for all countries to the Covid-19 vaccine once it is developed,” Ramaphosa said.

“I would like to call upon the G20 countries to assist with the funding shortfalls for the access to Covid-19 tools accelerator to ensure this platform is able to deliver on its mandate.”

The broadcast headline captured in the screenshot was taken out of context. At no point during his address did Ramaphosa say that a Covid-19 vaccine would be “mandatory”, but rather that “all countries” should have fair access to them.

Contacted by AFP Fact Check, a spokesman for the South African government, Ayanda Holo, confirmed that Ramaphoa has said that Covid-19 vaccines would be “available to all” but has “never” said they would be mandatory.

A day later, Ramaphosa addressed a variety of issues at the second session of the G20 and while he touched on the Covid-19 pandemic. Again, there was no mention of mandatory vaccines.

The global race to develop a Covid-19 vaccine is heating up as several vaccine makers worldwide have published preliminary data showing efficacy rates of 90 percent and higher.

As reported by AFP, Russia said its Sputnik V coronavirus vaccine was 95 percent effective, although the number of cases used to make the calculation was not disclosed.

AstraZeneca and Oxford University on Monday announced their drug had proved, on average, 70 percent effective at stopping the virus after testing it on 23,000 people. 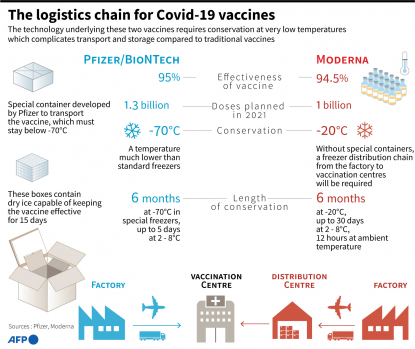 While countries are planning on how best to distribute these vaccines to their citizens, France’s President Emmanuel Macron announced on November 24, 2020, that vaccines would be made available to high-risk populations first and will not be made mandatory.

Meanwhile, Australian airline Qantas said it would require international air travellers to be vaccinated against Covid-19 to fly with them, adding the rule was likely to become "common" across the industry, with governments and airlines currently considering the introduction of electronic “vaccination passports”.