A graphic video showing the execution of a group of men has been shared thousands of times on Facebook alongside claims that it depicts the slaughter of Christians in Afghanistan after the Taliban’s takeover in August 2021. This is false; the footage is from a 2014 Islamic State (IS) propaganda video showing the massacre of Iraqi soldiers and Shia Muslims.

“Christian’s are being massacred in Afghanistan. If Buhari has his way in Nigeria, the same will happen (sic),” reads the caption in the Facebook post, which has been viewed more than 13,000 times since it was posted on September 11, 2021. 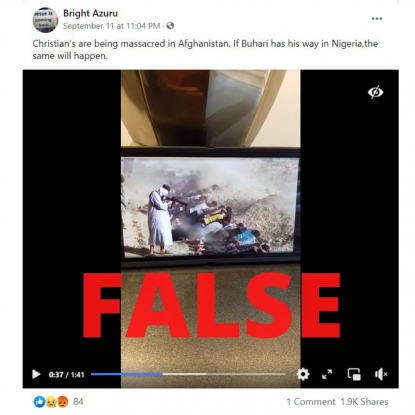 A screenshot taken on September 15, 2021, showing the false post

Nigeria has been battling Boko Haram Islamic insurgents in the country’s north for years, creating a regional security crisis for President Muhammadu Buhari, who swore to end the instability during his term of office.

However, the situation continues to simmer and Buhari’s critics say he hasn’t done enough to eliminate Boko Haram.

In August, the Taliban, a religious-political movement seeking the establishment of Islamic emirates, took control of Afghanistan following the exit of the US military from the country after 20 years.

Since then, religious groups across the world have reported the persecution of Christians and religious minorities in the country.

“It is impossible to live openly as a Christian in Afghanistan,” Opendoors UK, a non-denominational mission supporting persecuted Christians, said in a call to prayer in August 2021. The Voice of the Martyrs (VOM), an interdenominational missions organisation, also said that “Afghan Christians cannot worship openly,” and that preaching is forbidden.

In 2015, The Guardian had listed Afghanistan as one of the worst places to be a Christian in the world.

However, old videos and pictures are making the rounds on Facebook, falsely described as scenes from Afghanistan showing the persecutions of Christians. AFP has debunked some of these claims here and here.

Similarly, the execution footage being shared in Nigeria is also unrelated to events in Afghanistan.

A reverse image search using video verification tool InVID-WeVerify uncovered an abridged version of the video uploaded here on YouTube as part of a report by CBS News in August 2014.

The CBS broadcast reveals that the footage now being shared on social media was a propaganda video released by IS terrorists during their murderous bloodletting across parts of the Middle East.

In this case, the video was uploaded in August 2014 after the massacre of Shia Muslims in northern Iraq.

One of the survivors, who was a soldier in Camp Speicher, a former American army base in Tikrit, Iraq, shared his story with the New York Times here. 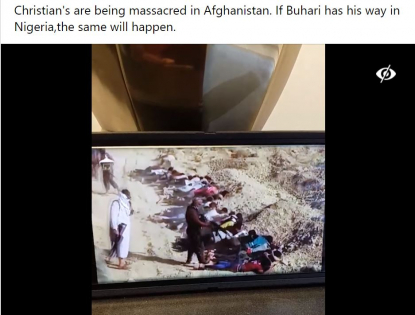 Screenshot from the Facebook video, showing the same frame as the CBS report below 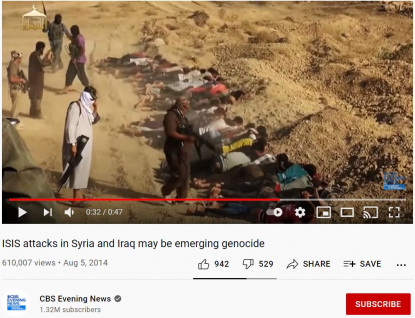 Screenshot from a CBS report uploaded in August 2014

Following the August 2021 Taliban takeover in Afghanistan, US servicemen evacuated Americans and allies from the capital Kabul when suicide bombers attacked crowds of people, killing 13 US troops and dozens of civilians.

The bombing was claimed by Islamic State-Khorasan or IS-K, a regional chapter of IS in Afghanistan that has been in conflict with the Taliban. US President Joe Biden promised to make IS-K pay for the attack.