Skip to main content
Members of the Taliban Badri 313 military unit secure the airport in Kabul on August 31, 2021, after the US has pulled all its troops out of the country to end a brutal 20-year war. ( AFP / Wakil KOHSAR)

A viral text post claiming 229 Christian missionaries “have been sentenced to death tomorrow afternoon by the Afghan Islamists” has been shared hundreds of times on Facebook. The post goes on to claim that "the radical Islamic group" has seized control of the Iraqi city of Quraqosh". It circulated online after the Taliban seized control of Afghanistan in August 2021. The claims are false, according to human rights organisations and charities. The post mimics an old hoax that has circulated online since at least 2019.

The claims were shared by a Papua New Guinea-based Facebook user here on August 18, 2021. 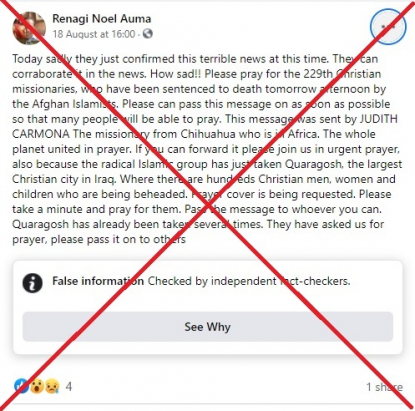 The post cites a missionary named “JUDITH CARMONA”, who is purportedly based in Africa.

The post states: “Please pray for the 229th [sic] Christian missionaries, who have been sentenced to death tomorrow afternoon by the Afghan Islamists.

“The radical Islamic group has just taken Quaragosh, the largest Christian city in Iraq. Where there are hundreds [of] Christian men, women and children who are being beheaded."

The post goes on to say: “Pass the message to whoever you can. Quaragosh has already been taken several times".

Qaraqosh -- also known as Bakhdida or Hamdaniyah -- is a predominantly Christian city in Iraq captured and held by Islamic extremist group ISIS from 2014 - 2016.

It was retaken by Iraqi forces during the battle for Mosul.

The claim circulated online after the Taliban seized control of Afghanistan from the country’s government in the aftermath of the US military and diplomatic withdrawal.

The Afghan capital of Kabul has seen scenes of desperation after thousands of Afghans surged the city’s airport seeking to leave on foreign evacuation flights, AFP reported.

The claim has also been shared hundreds of times on Facebook in multiple posts including here, here and here.

AFP Fact Check debunked similar posts in 2019 which claimed “22 Christian missionaries” were “sentenced to death” by the “Islamist in [sic] Afghans”.

The image circulating alongside the posts circulating in 2019 was from ISIS propaganda -- not from the Taliban.

Similar claims have been circulating since 2009, according to US fact-checking website Snopes which reported the hoax also spread via emails and text messages.

Open Doors -- a charity that provides aid to persecuted Christians worldwide -- told AFP that the posts shared in 2019 and 2021 are all false.

“We can confirm that both of these [hoaxes] are false. I am sure there will be many, many, more such hoaxes in the weeks and months to come,” the spokesperson said.

Keyword searches have found no credible reports of the purported claims.

A spokesperson for human rights organisation Amnesty International told AFP it had not recorded any cases similar to those outlined in the Facebook posts.

“To date, we have not seen any reports such as this. We will continue to monitor the human rights situation in Afghanistan,” the Amnesty International spokesperson said.

The Iraqi city of Qaraqosh -- which was toured by Pope Francis in 2021 -- actually lies thousands of kilometres from Afghanistan.

It is not controlled by the Taliban, who have fractured ties with the local ISIS branch known as ISIS-K, according to an AFP report here.

While this post is a hoax, Open Doors told AFP the situation is “precarious” for Afghan Christians and their website explains that it is impossible to live openly as a Christian in Afghanistan.

“We know from the media but also from local sources that the TB [Taliban] are going door to door to weed out unwanted elements… Christians are in grave danger. Anybody who is exposed, will be severely punished,” the spokesperson told AFP in an email.