Footage shows anti-government protest in Colombia, not Christians in bags in Afghanistan

A video showing people purportedly tied up in transparent plastic bags has been posted on Facebook alongside claims that it shows persecuted Christians being left to die by the Taliban in Afghanistan. This is false; the footage was taken at a protest against taxes in Colombia and is unrelated to the Taliban’s takeover of  Afghanistan.

“Christians wrapped in nylon bags to die slowly in Afghanistan. These people need our prayers,” reads part of the caption on this video, now viewed more than 11,000 times since it was posted on Facebook on September 9, 2021. 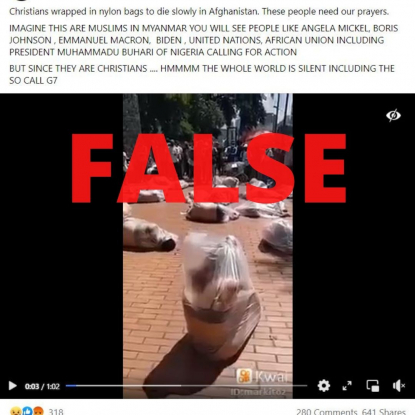 A screenshot taken on September 13, 2021, showing the false post

The clip shows a number of people bound up in large clear plastic bags.

The same claim and footage were published on Facebook in Africa here, here and here, and debunked in French by AFP Fact Check here.

In August, the Taliban, a religious-political movement seeking the establishment of Islamic emirates, took control of  Afghanistan following the exit of the United States military from the country after 20 years.

Since then, many religious groups across the world have reported the persecution of Christians and religious minorities in the country. “It is impossible to live openly as a Christian in Afghanistan,” Opendoors UK said in a call to prayer in August, 2021.

The Voice of the Martyrs (VOM), an interdenominational missions organisation serving Christians worldwide, also said that “Afghan Christians cannot worship openly,” and that preaching is forbidden.

As early as 2015, The Guardian had listed Afghanistan as one of the worst places to be a Christian in the world.

But the image was not taken in Afghanistan. A reverse image search using keyframes extracted from the footage with video-verification tool InVID-WeVerify uncovered a longer version of the video uploaded here on YouTube.

The video was uploaded on May 27, 2021, and it shows an anti-government protest in Colombia. The video's Spanish-language caption translates to English as: “Performance [packed] in Medellin during a national strike on May 26, 2021”. Medellin is one of the largest cities in Colombia.

Pictures from the demonstration were also uploaded to Instagram here in May 2021.

The same video has been previously shared out-of-context, purporting to show Covid-19 victims in Indonesia wrapped in plastic bags. This was debunked by AFP Fact Check here.

Jhonatan Rodriguez, a Colombian photographer who took photos during the protest, told AFP Fact Check that it was "an artistic performance that took place on May 26 of this year in Medellin, Colombia".

"The act of the performance was carried out as a way to protest against the government of Colombia".

Colombians have been protesting the government's decision to raise taxes since April 2021. The protesters have faced heavy repression, which has led to the death of at least 60 people.

Google Street View imagery shows that the protest was held in the city’s Poblado Park.