Mixture of aloe vera leaves, ginger, pineapple and soursop is not a remedy for cancer

A recipe combining several tropical fruits and other plants is being shared on Facebook in Cameroon alongside a claim that the mixture can cure cancer. However, this is false. Experts told AFP Fact Check that the claims are baseless and there is no miracle food to heal the disease.

The Facebook post, archived here, has been shared more than 130 times since it was published on August 19, 2021. 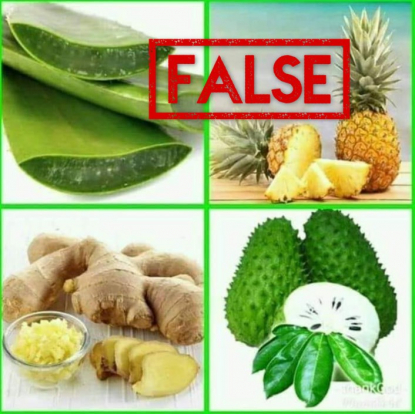 The post instructs people to mix aloe vera, ginger, pineapple and soursop, and “drink one cup in the morning and in the evening for 3weeks (sic)”.

The purported cure has been shared previously online including here and here. AFP Fact Check also debunked the claim in French.

However, there is no scientific evidence that this concoction can heal cancer. Experts told AFP Fact Check that no studies corroborate these claims.

Cancer is one of the leading causes of death, killing more than 10 million people in 2020, according to the World Health Organization (WHO).

The French National Cancer Institute said there are no “miracle foods” to cure cancer.

“This claim is misleading and dangerous for cancer patients who could decide to stop their regular treatment and opt for something like this,” spokeswoman Lydia Dauzet told AFP Fact Check.

“Claims suggesting that cancer can be cured with food (...) plays on the distress of patients facing the disease,” Dauzet added.

Dr. Armand Thouassa, an oncologist at the Adolphe Sice de Pointe-Noire General Hospital in Congo, also confirmed that the recipe “would do nothing to prevent the proliferation of cancer cells”.

“This is a commercial hoax,” Thouassa added. “No scientific study corroborates the therapeutic efficacy” of these three ingredients “on cancer itself”.

She did note that studies have shown that ginger can help ease nausea after chemotherapy.

He explained that cancer treatments require a set of cutting-edge medical specialties — namely surgery, radiotherapy, antimitotic drugs, hormones and immunological products — depending on the type of cancer and the stage of progression.

Despite these proven treatments, “miracle cures” proliferate the internet, “most often without any scientific evaluation with regard to efficacy and the risk of toxic side effects,” Bey said.