Multiple Facebook posts claim people living in Pakistan’s Hunza Valley are cancer-free because they consume apricot seeds which allegedly “kill cancer cells”. The posts are misleading: health experts say apricot seeds are not effective in preventing or treating cancer. The claim about Hunza Valley people living "without cancer" was debunked decades ago by researchers.

A New Zealand-run Facebook page posted the claims here on April 13, 2021. The post has been shared more than 200 times. 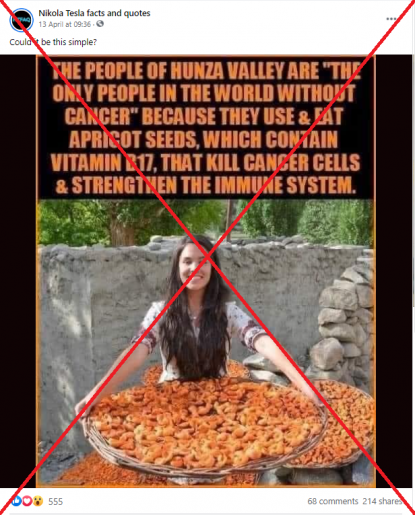 It states: “THE PEOPLE OF HUNZA VALLEY ARE ‘THE ONLY PEOPLE IN THE WORLD WITHOUT CANCER’ BECAUSE THEY USE & EAT APRICOT SEEDS, WHICH CONTAIN VITAMIN B17, THAT KILL CANCER CELLS & STRENGTHEN THE IMMUNE SYSTEM.”

The Hunza Valley is a mountainous region in northern Pakistan, located near the country’s borders with Afghanistan and China.

Identical claims have also been shared in Facebook posts here and here.

There is “no evidence” that apricot seeds kill cancer cells, Tanya Buchanan, CEO of the nonprofit organisation Cancer Council Australia, told AFP in an email on April 23, 2021.

“The claims have stemmed from misinformation.”

“Vitamin B17” refers to a substance called amygdalin that is naturally found in plants, including apricot seeds, according to this information page published by Cancer Research UK.

The use of amygdalin or its synthetic form laetrile as an alternative treatment for cancer “can cause serious side effects” according to Cancer Research UK.

“Laetrile contains cyanide. So the side effects of laetrile are the same as those of cyanide,” its website states.

Side effects range from fever and headaches to nerve damage and death, it says.

Consuming more than three apricot kernels could exceed the safe consumption levels for cyanide, the European Food Safety Authority warned in this statement issued in 2016.

Claims that people in the Hunza Valley are cancer-free due to consumption of apricot seeds were debunked as early as 1980.

A study published here on February 15, 1980 in the journal Cancer states: "[An] often repeated, unsupported claim [is] that the Hunzas, living in an isolated region of the Himalayas, have a very long life span and are remarkably free from disease.

"Their diet is presumed to include considerable amounts of apricot seeds. These claims were shown to be totally false by a Japanese expedition who found that the Hunzas were malnourished and suffered from a variety of disease including cancer."

In the book 'Personality and Health in Hunza Valley' (1963) by Kinji Imanishi, it notes Japanese researchers documented at least 10 tumours in the people living in the Hunza Valley during an 1955 expedition.

The researchers said the rumours about the inhabitants of the Hunza Valley being cancer-free were unfounded, according to the book.

"The results unfortunately broke down the dream of finding an Utopia with no disease," the book notes.