An image shared thousands of times on Facebook purports to show a house that is up for sale, perched on top of landslide rubble. The image, however, has been doctored. The original image has appeared in news reports about a 2010 landslide in Taiwan and does not show a house. 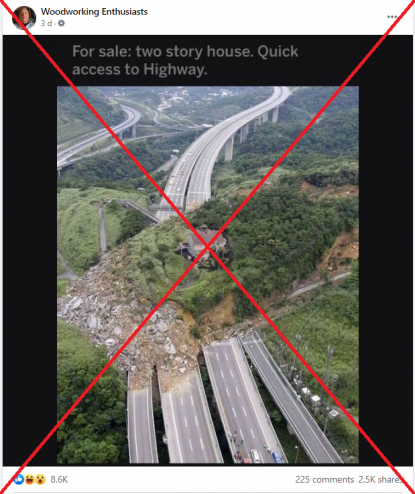 The image was also shared here and here on Facebook.

A reverse search on Yandex found the original image appears in this April 25, 2010 article from UK newspaper The Telegraph.

The Telegraph credits the image to Reuters news agency.

"A landslide covers National Highway No. 3 close to Keelung in north Taiwan. Rescuers are searching for passengers in three cars buried when a hillside collapsed," the image's caption reads.

The image was digitally altered to insert the house on top of the landslide rubble.

Below is a comparison of the image in the misleading posts (L) and the photograph in the Telegraph article (R): 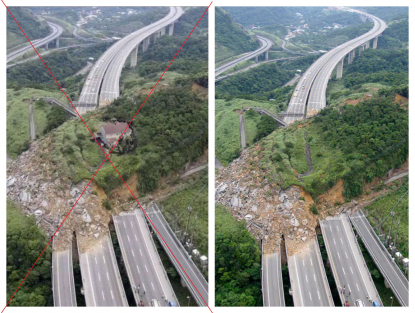 The same image of the landslide was also published by NBC News and British newspaper Metro.

The landslide struck north Taiwan between Taipei and Keelung on April 25, 2010, cutting through a highway and killing four people.

An archived document here from Taiwan’s Freeway Bureau shows several images of the clean-up operation in the days following the landslide. None of the images feature a house.

A screenshot of the Freeway Bureau document