Skip to main content
A couple with a child walk on a dandelion meadow outside the village of Rakhmanovo in Russia on May 28, 2020. ( AFP / KIRILL KUDRYAVTSEV)

"Dandelion root is a medicine that treats all forms of cancer," reads a Korean-language Facebook post from July 22. "It is best to eat the root raw, but you can also drink it as a tea if you dry it".

The post describes some of the ways to consume dandelion extract and includes an anecdote about how the purported cure was recommended to a person with terminal liver cancer. 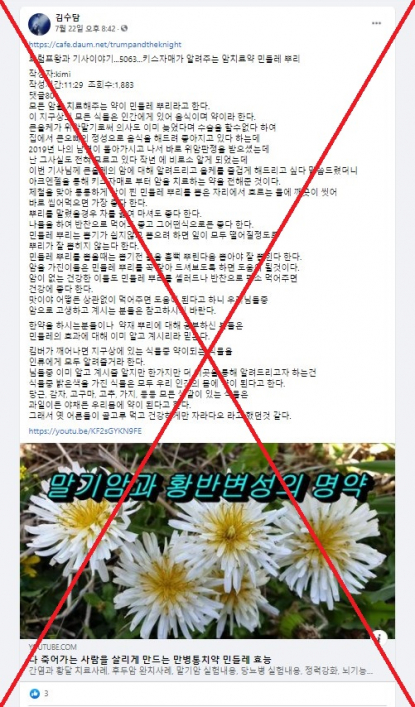 The post links to a YouTube video titled "Herbs that make people who are dying alive by eating only one root" that shares the purported medicinal benefits of consuming dandelion.

Similar posts were shared on Facebook, and on Korean platforms Daum Cafe and Naver Blog.

However, the claim is misleading; health experts said that dandelions cannot cure all forms of cancer.

"There is no one substance yet discovered in the world that can be used to cure all forms of cancer," Professor Myung Seung-kwon from the National Cancer Centre of South Korea told AFP.

"Cancer is treated through a variety of proven methods, including through chemotherapy, surgery or radiation therapy, among others".

Claims about dandelion's purported anti-cancer properties resemble a "folk remedy" that "having not been tested rigorously, is almost certainly false," he added.

"For a substance to be proved as effective against cancer, it must not only be tested through laboratory studies and animal studies, but also multiple human trials involving thousands of participants."

A study published in 2013 by researchers from Canada's Windsor Regional Hospital, including Dr. Caroline Hamm, demonstrated only "one case of monocytic leukaemia that responded to dandelion root tea."

The study, published in Blood, a journal from the American Society of Haematology, cites the case of a patient who remained in remission for four years, during which he consumed dandelion root tea.

She found "no responses [to the use of dandelion root extract] outside of this particular disease" and that "most people [with cancer] do not respond" to the treatment, Hamm told AFP on July 27.

An earlier study that examined the anti-cancer effects of dandelion extract was led by Professor Lee Hyun-hwa, a biologist at South Korea's Chosun University, in 2007.

She added, however, that the study was conducted on a "molecular level and on mice," and that  "the study's results could differ when applied to humans".

The Memorial Sloan Kettering Cancer Center, one of the world’s largest cancer treatment facilities, says on its website that "dandelion has not been shown to treat or prevent cancer."

Dandelion was "found to have anticancer properties in various cancer cells, but studies have not been conducted in humans," the centre notes.

A similar conclusion was published by South Korea’s National Cancer Centre, an institute run by the Ministry of Health and Welfare, in a report from April 10, 2011.

"Some laboratory studies have shown dandelion extracts exhibit inhibitory effects on cancer cells on a molecular level, but there is still a lack of research on whether these effects apply to people," the report read.