Hundreds of Facebook posts, some of which have circulated for years, claim a Chinese professor found that drinking hot lemon water kills cancer cells. The claim is false; health experts say that no particular food, including lemon, can cure cancer. AFP found no trace of the Chinese professor, whose name has long been linked to the lemon "cure" in social media posts promoting it.

"This matter is very important," reads a Facebook post from August 1, 2018 shared more than 125,000 times. "Chief Executive Professor Chen Horin from the Beijing Military Hospital said, 'Lemon slices in a glass of hot water can save you for the rest of your life.'"

"Hot lemon water kills cancer cells. Cut a lemon into three pieces and put them in a cup. Then pour hot water in it. It's done (alkaline water). Drinking it on a daily basis will give special benefits." 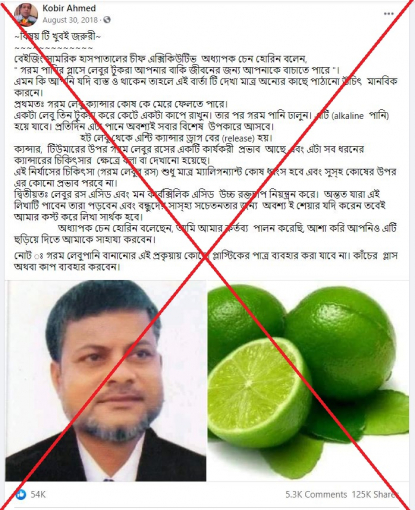 Similar claims have been circulating on Facebook for years, and resurfaced here and here on Facebook as recently as July 23.

"No one can say hot lemon water or any other particular food can cure cancer and such claims have no scientific basis. There are different types of cancers and many of these have their own ways of treatment but drinking hot lemon water is definitely not among them," he told AFP.

"Citrus fruits including lemon sometimes can have some positive impact in preventing certain types of cancers but that's not a treatment."

Professor Nicolas Boissel, a specialist in blood cancer at the Saint-Louis hospital in Paris, has similar views.

When the claim was spreading in 2019, he told AFP: "Neither hot water, nor lemon, nor sugar-free diets have proven anti-cancer action. Lemon derivatives (like many other plants for that matter) have shown anti-cancer activity. This probably explains the confusion.”

Professor Hervé Curé, oncologist and former director of the Godinot Institute in Reims in France, also refuted the rumours.

"This is obviously false. There is no rational scientific basis for such claims. There are anti-cancer foods, but lemon is not one of them. A few foods work as a preventative, but not curative: curcumin, for example. Numerous scientific publications have documented its action,” he told AFP.

The rumour can be traced back to at least 2011, when it was debunked by American fact-checking site Snopes.

The Facebook posts attribute the false claim to "Chief Executive Professor Chen Horin of Beijing Military Hospital", but AFP found no such professor.

The name appears to be a variation of Chen Huiren -- not Horin -- who is a genuine professor at Beijing's Military Hospital, whose website lists him as chief physician.

Chen spoke out about the false claim in an interview in 2018 with Chinese state-run newspaper Beijing Youth Daily.

He said his name had been "faked" in a Weibo article which shared the claim alongside what appeared to be Chen's signature and a hospital stamp.

"The so-called "hot lemon can kill cancer cells" online article was written by someone who faked my name, and the portrait photo alongside the article does not show me. Please don't believe it," he said.