CNN did not describe Afghanistan as 'violent but mostly peaceful'

Social media posts feature an image of an apparent CNN report describing the situation in Afghanistan as "violent but mostly peaceful." However, the picture is a composite made from an unrelated broadcast in the US as well as a still photo from Kabul, and the network says the post is doctored.

"NEW OVERNIGHT: VIOLENT BUT MOSTLY PEACEFUL TRANSFER OF POWER," says the news banner in the image, which was included in an August 15, 2021 Facebook post.

It appears to show a journalist speaking in front of footage of a helicopter flying over Kabul, the capital of Afghanistan, which fell to Taliban insurgents after 20 years of war and led to chaos at the airport where the US began evacuating tens of thousands of people. 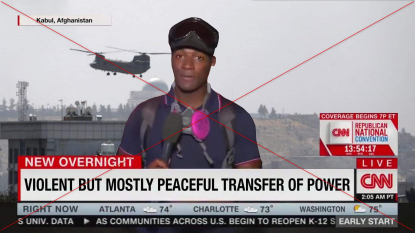 But CNN publicist Lauren Bobek told AFP that the image is "doctored and not real."

This was confirmed by AFP through Google reverse image searches, which determined that it is a combination of a still photo by the Associated Press and a screenshot of CNN journalist Omar Jimenez from an August 2020 segment shot in the US state of Wisconsin.

The news banner from that segment said "FIERY BUT MOSTLY PEACEFUL PROTESTS AFTER POLICE SHOOTING," referring to demonstrations following the wounding of Black man Jacob Blake by police. 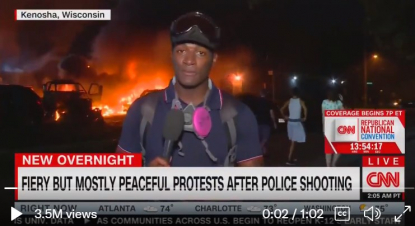 A screenshot taken on August 18, 2021 shows CNN footage from Wisconsin

The hardline Islamist militants entered Kabul on August 15 and the US-backed government collapsed, along with its security forces.

AFP Fact Check has also debunked posts claiming that CNN praised the Taliban for wearing masks to protect against Covid-19 during their offensive -- an assertion that originated on a satirical site.