Skip to main content
Crowds watch as two men, accused of being involved in the assassination of Haitian President Jovenel Moise, are transported by police vehicle to the Petionville station in Port-au-Prince on July 8, 2021 ( AFP / Valerie Baeriswyl)

An image of a purported CNN article says US President Joe Biden authorized a US military intervention in Haiti on July 7, 2021, the day the Caribbean country's president was assassinated. But CNN says the article is fake, and no such deployment has been announced.

"Haiti President Jovenel Moise assassinated in attack on his residence. US Troops on their way," reads the headline of the supposed article, an image of which is featured in this July 8 Facebook post.

The CNN logo and the cnn.com web address appear above the headline, making it look like a screenshot of the US news channel's site taken on a smartphone.

The image also includes text that says: "President Joe Biden has authorized this afternoon a US intervention in Haiti after the assassination of president Jovenel Moise", with the first troops scheduled to arrive as early as the evening of July 7. 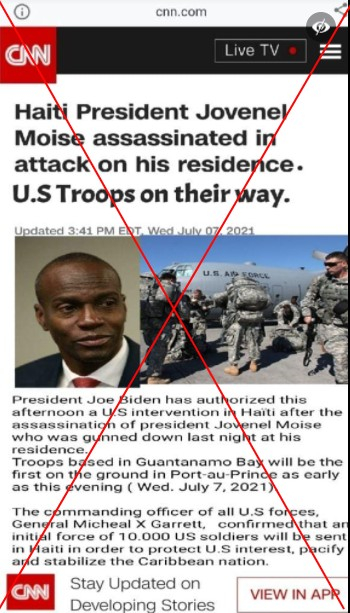 A screenshot taken on July 12, 2021 shows a fake CNN article

Moise was assassinated at his residence on the outskirts of Port-au-Prince in an attack that also wounded his wife. According to Haitian authorities, it was perpetrated by a hit squad of 28 men -- 26 Colombians and two US citizens.

However, CNN did not publish an article on July 7 saying there would be an imminent American military intervention in Haiti.

"We've checked this and can confirm that this is a fabrication," a CNN spokesperson told AFP.

Lieutenant Colonel Ken Hoffman, a spokesman for the Office of the Secretary of Defense, told AFP on July 12 that the United States had not deployed troops to Haiti, and there has been no such announcement from the White House.

The first part of the headline in the screenshot matches that of a real July 7 CNN report.

However, the original CNN article does not say that American troops are "on their way." The text in the screenshot making that claim is larger and in a different font than the headline of the original article, indicating that it was added later. The content of the article differs as well.

Request for US intervention

Elections Minister Mathias Pierre told AFP on July 9 that Haiti asked for US and UN troops to help stabilize the country.

On July 12, Biden called on the country's political leaders to "come together," while White House Press Secretary Jen Psaki said that the US did not rule out sending soldiers and Haiti's request was "still under analysis."

AFP Fact Check has previously debunked the false claim that Haiti's first lady died following the attack that killed her husband, and posts alleging that a photo of a body showed the assassinated president.