Skip to main content
People cheer as a police car drives past at the Petionville Police station where armed men, accused of being involved in the assassination of President Jovenel Moise, are being held in Port au Prince on July 8, 2021 ( AFP / Valerie Baeriswyl)

Photo of Haiti lawyer misrepresented as image of assassinated president

Websites and social media posts claim a photo of a man with wounds to his chest pictures assassinated Haitian president Jovenel Moise. This is false; an AFP journalist says the image shows the body of lawyer Monferrier Dorval, who was killed in front of his home in August 2020, and it appears in a photo of a protest taken that year. 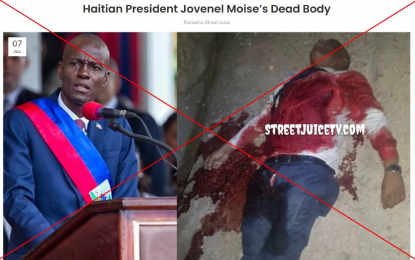 Similar posts were shared on Instagram as well as in Spanish on Facebook following Moise's July 7 assassination.

Armed men entered the president's residence on the outskirts of Port-au-Prince early that day, fatally shooting him and wounding first lady Martine Moise, who is receiving treatment in the United States.

However, the body in the photo shared online does not show the deceased president.

Amelie Barron, an AFP correspondent in Haiti said the image shows the body of Dorval, the popular president of the Port-au-Prince bar association who was killed on August 29, 2020.

"It circulated right away that day," Barron said.

A reverse image search also found that it appeared in a September 1 Associated Press photo of a protester lying on the ground covered in pictures of Dorval -- more than 10 months before Moise's assassination. 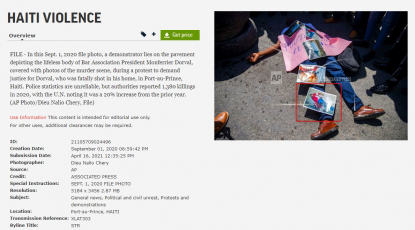 Screenshot of a September 1, 2020 image on the Associated Press website

Haiti's police said on July 8 that at least 28 people carried out Moise's assassination, 26 Colombians and two Americans of Haitian origin. The assassins appear to have been professional mercenaries, and six of the Colombians could be ex-military, according to the country's defense minister.