Skip to main content
Members of the military are seen near the hospital where Haitian First Lady Martine Moise was taken on July 7, 2021 in Port-au-Prince, Haiti ( AFP / VALERIE BAERISWYL)

Online articles and social media posts claim that Haiti's first lady Martine Moise died after a July 7, 2021 attack that killed her husband the president. This is false; Haitian and American officials said she was wounded but still alive, and she is being treated in the United States. 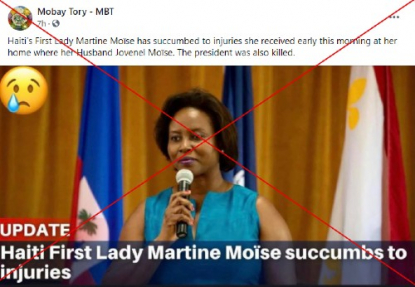 Haiti's president was assassinated and his wife wounded early on July 7 in a gun attack at their private residence.

Various Twitter accounts reported the death of the first lady from the wounds she suffered, including one belonging to the president of Ecuador, Guillermo Lassa, who denounced "the vile assassination of President Jovenel Moise and his wife Martine Moise."

These reports were false at the time of publication, and no official source confirmed the death of Martine Moise.

In his televised statement on July 7 at 9:00 am, Prime Minister Claude Joseph said in Haitian Creole that Martine Moise was wounded.

"She is currently getting all the care that her case requires," he said.

Joseph subsequently said during a news conference late on July 7 that Moise was "out of danger" and that "her situation is stable."

Smith Augustin, the Haitian ambassador in the Dominican Republic, said during a press conference the same day that "she was seriously wounded" and was receiving medical treatment.

Asked for comment about Jovenel Moise's assassination, US President Joe Biden said: "We condemn this heinous act, and I am sending my sincere wishes for First Lady Moise's recovery."

And a declaration from the Organization of American States referred to the attack causing "serious injury" to the first lady.

She was first treated at a local hospital, then rushed by air ambulance to the Ryder Trauma Center in Miami, Florida.

Le Moniteur, the official journal of the Haiti government, published an order for a 15 day "state of siege," which will also be a time of national mourning for president Moise. The decree did not mention the first lady.

Jovenel Moise governed Haiti by decree since January 2020, and anger had been rising over increased gang violence and political instability, drawing protesters onto the streets.