This photo has circulated in reports about Iran in the 1970s

As the Taliban's seizure of Afghanistan sparked concerns about women's rights, a photo of women reading and wearing short skirts surfaced in social media posts claiming it showed Afghan women in the 1970s. However, the claim is misleading: the image has previously circulated in media reports about Iran in the 1970s.

"#Afghanistan in the past 1970 #Afghanistan #Taliban," reads a tweet posted on August 17 that has since been retweeted more than 200 times. 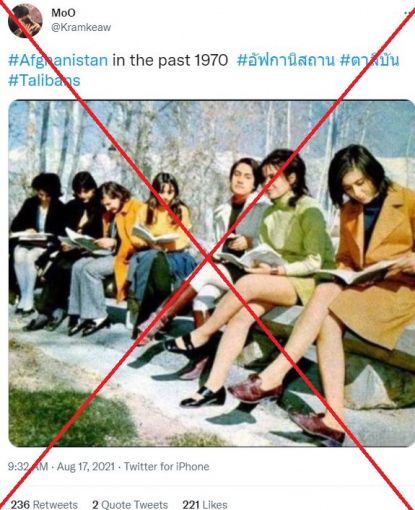 The Taliban's takeover of power in Afghanistan after being ousted by a US-led invasion in 2001 has sparked concerns over the group's brutal human rights record.

The Taliban imposed draconian rules on women and girls during their 1996-2001 regime, which was infamous for deaths by stoning, girls being banned from school and women from working in contact with men.

Taliban spokesman Zabihullah Mujahid promised a "positively different" regime from that stint in power, telling a press conference they were "committed to letting women work in accordance with the principles of Islam", without offering specifics.

The same photo of the young women was shared around the world alongside similar claims, including Thailand, South Korea, Spain and Hungary.

A reverse image search on Google found the same photo published in this Foreign Policy article from February 6, 2012, titled, "Once Upon a Time in Tehran".

The photo is captioned, "Tehran University students lounge in 1971. Tehran University was opened to women in 1934 when the college was founded. After the revolution, women were still allowed to attend university -- but they now sit in segregated areas. "

The Iranian Revolution took place between 1978-1979, leading the country to become the Islamic Republic.

Below is a screenshot of the photo in the misleading post (left) and the photo in Foreign Policy's article (right).

Foreign Policy credits the photo as "courtesy of Kaveh Farrokh". Farroukh is an award-winning historian of Ancient Iranian.

The same photo was also published on Farrokh's personal website, in this article titled "Old Tehran 1960s and 1970s".

The same photo also appeared on this 2015 report by CNN Turkish, about the Islamic Revolution in Iran.

AFP has previously debunked a string of false claims around the Afghanistan conflict here, here and here.