Image of Taliban leaders was taken in Moscow, not in Afghanistan presidential palace

An image of Taliban co-founder Mullah Abdul Ghani Baradar walking with three other members of the Islamist group has been circulating on social media alongside claims it shows the militants taking over Afghanistan’s presidential palace in Kabul. However, the claim is false: the photo was taken earlier this year during a conference in Moscow.

The photo was published on Facebook by Nigerian news site IgbereTV.

“BREAKING!!! Leader Of Taliban, Mullah Abdul Ghani Baradar Storms Presidential Palace Of Afghanistan | #IgbereTV,” reads the Facebook post, which was published on August 15, 2021, and has since been shared more than 350 times. 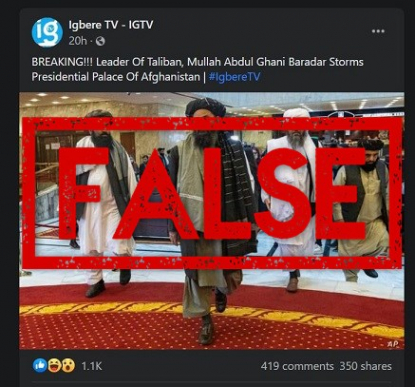 The claim is also circulating on Twitter and Instagram, and has been shared in Africa, Asia and Europe.

AFP Fact Check previously debunked a claim by IgbereTV that a police officer raped a Covid-19 patient at a detention centre.

On August 14, 2021, Taliban fighters took over checkpoints across Afghanistan’s capital Kabul and entered the presidential palace after police and other government forces gave up their posts in the city while president Ashraf Ghani fled the country. 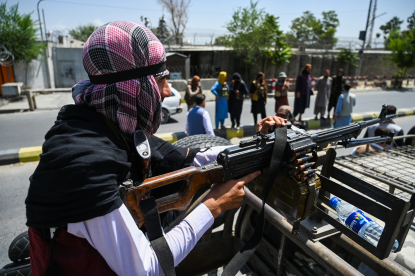 A Taliban fighter mans a machinegun on top of a vehicle as they patrol along a street in Kabul on August 16, 2021 ( AFP / Wakil KOHSAR)

However, the photo of Baradar and other Taliban leaders has been online since March 2021 — four months before Afghanistan fell to the militant group.

AFP Fact Check used Google reverse image search to trace the photo to a report from the website of the Russian online newspaper The Moscow Times.

From there, we found the original version of the image in AFP’s photo archives, taken by Alexander Zemalian on March 18, 2021.

“Taliban co-founder Mullah Abdul Ghani Baradar (C) and other members of the Taliban delegation arrive to attend an international conference on Afghanistan over the peaceful solution to the conflict in Moscow,” reads the caption with the photo. 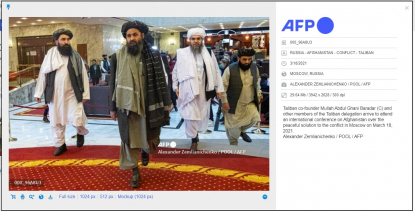 The Taliban’s rapid takeover of Afghanistan came about a month after US President Joe Biden unveiled plans to withdraw American troops ahead of the September 11 completion date of a 20-year military mission in the south Asian country.