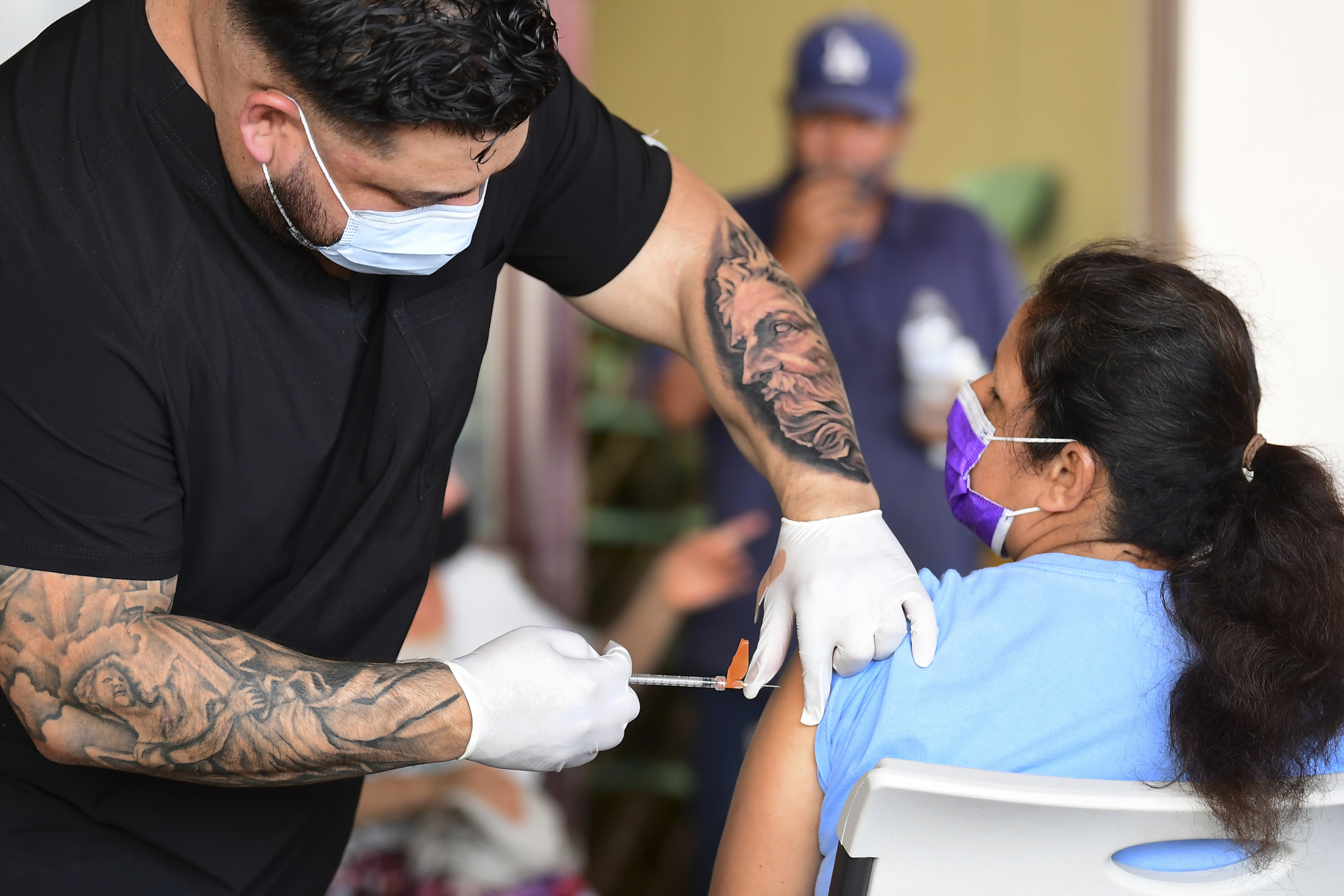 A respiratory therapist at a mobile clinic administers a dose of the Pfizer-BioNTech Covid-19 vaccine to an East Los Angeles resident on July 9, 2021 in California ( AFP / Frederic J Brown)

US Supreme Court ruling did not allow patenting of vaccinated people

Social media posts claim a 2013 US Supreme Court ruling means that people vaccinated against Covid-19 are no longer legally human and are therefore patentable. This is false; the decision makes no mention of vaccines, and experts say the court ruled that nothing naturally occurring -- including humans -- can be patented.

"In a 2013 court case Pathology v Myriad Genetics, inc, in the US, the Supreme Court ruled that... if a human genome is modified by mRNA vaccines (which are currently in use), then the genome can be patented," the post says, referring to the messenger ribonucleic acid technology employed in the most widely used Covid-19 shots.

"This means that everyone who has received the vaccine is now technically 'patented' and something that is patented is 'proprietary' and will be included in the definition of 'transhumans'." 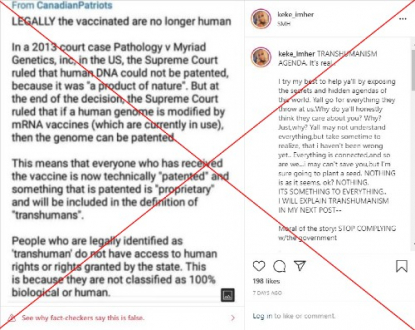 More examples of the claim appeared on Instagram here and here as well as in a Facebook post that said: "If You Have Been Vaxed You Are now Owned."

It is part of a torrent of inaccurate claims about vaccines that have proliferated across the internet as countries around the world seek to immunize their populations against Covid-19. AFP has also previously debunked the conspiracy theory that global elites are using the pandemic as a pretext to control the population.

The Supreme Court case referred to in the claim "is not related to the question of determining who/what is human and what is not," Ana Santos Rutschman, an expert in vaccine law and assistant professor at St Louis University's Center for Health Law Studies, told AFP.

"There's no relationship between this case and any claim related to the administration of any type of vaccine, including mRNA vaccines," nor is there a "case or law saying that after any type of medical intervention (including receiving a vaccine) someone ceases to be considered a human for legal purposes," Rutschman said.

Instead, the Supreme Court found in Association for Molecular Pathology v. Myriad Genetics, Inc that isolated segments of human DNA could not be patented. The unanimous decision on June 13, 2013 overturned exclusive rights to use genes but allowed companies to patent their developments of synthetic, so-called complementary DNA.

A search of the court's decision found no mention of the words "vaccine" or "vaccines," and the emergency use authorizations for the Pfizer-BioNTech and Moderna mRNA Covid-19 vaccines came more than seven years after the case was decided.

The US Centers for Disease Control and Prevention (CDC) says that mRNA vaccines are a new form of immunization designed to "teach our cells how to make a protein -- or even just a piece of a protein -- that triggers an immune response inside our bodies." It adds that the shots cannot "affect or interact with our DNA in any way."

Jennifer Piatt, of Arizona State University Center for Public Health Law and Policy, called the social media claim "ridiculous" and "a complete misstatement of how the vaccines work and what that court case said."

First, "there is no possibility for an altering of the human DNA via the Covid-19 vaccines like these posts would suggest," said Piatt, who is also a senior attorney with the Network for Public Health Law.

Next, the claims try to "manipulate the language of the Supreme Court's decision to argue that humans could be patentable. That's simply ludicrous... they're looking at it through a lens that isn't even there in the court's decision."

The case held that anything naturally occurring is not eligible for a patent, said both Piatt and New York University School of Law's Rochelle Dreyfuss.

"Your body can't be patented," said Dreyfuss, who is an expert on intellectual property law.

"The court looks at whether something is actually in nature, but it's never asking the question, 'Is this a human being?'" Dreyfuss said, describing the social media posts as "bonkers."