Skip to main content
An army health personnel prepares to inoculate a person with a dose of the Pfizer-BioNTech vaccine against the Covid-19 coronavirus in Colombo on July 7, 2021. ( AFP / Ishara S. KODIKARA)

This post published on July 5, 2021 claimed Sri Lanka is the first South Asian nation to receive the Pfizer vaccine.

"Sri Lanka received a batch of Pfizer vaccines this morning. Sri Lanka is the first country to receive the vaccine in South Asia. As it has to be stored in a temperature as low as -70 degrees, the batch been transported from Katunayake airport to Narahenpita central blood bank - State Minister Channa Jayasumana"

An image appearing to show a woman receiving a Covid-19 jab purportedly from Pfizer has been shared along with the post. The Sinhala-language text superimposed on the image reads as: 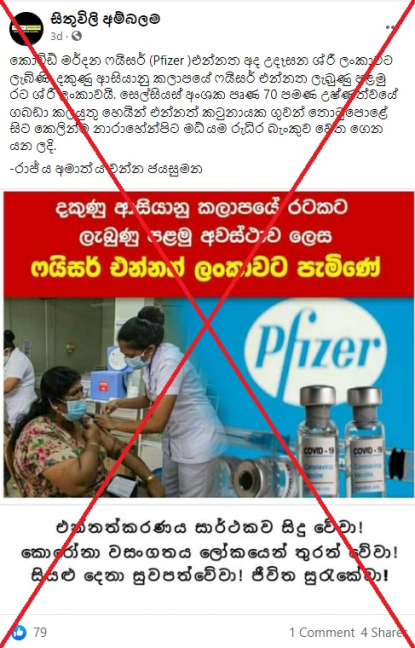 Similar claims were made on Facebook as seen here and here.

Sri Lanka received its first batch of Pfizer vaccines financed by the World Bank on July 5, 2021.

Minister Jayasumana was present at the National Blood Center to oversee the transfer of the vaccines that were flown in, into their cold storages.

Speaking to media at the event Minister Jayasumana says, The Pfizer vaccine, a production of USA, was received by Sri Lanka today to be used against Covid-19. Actually, Sri Lanka became the first country from the entire South Asian region to receive the Pfizer vaccine, as seen in the comment he made from mark 0:06 - 0:20 in this Youtube video featuring the arrival of the vaccine at the BIA.

The claim, however, is misleading. Sri Lanka was not the first South Asian country to receive Pfizer vaccines; both the Maldives and Bhutan received batches of Pfizer vaccines through a global vaccine sharing facility before Sri Lanka.

A keyword search on Google found that Maldives and Bhutan - two South Asian countries had received batches of Pfizer vaccines respectively in March and May 2021 via the COVAX facility - a program initiated by the WHO to ensure global equitable access to Covid-19 vaccines.

This tweet published by UNICEF Maldives on March 25, 2021 states that Maldives received a batch of 5,850 Pfizer vaccines via the Covax facility.

Moreover, keyword searches also found Bhutan received its first tranche of the Pfizer vaccine - 5,850 doses - on May 25, 2021 as reported in this article published by Bhutan's national newspaper Kuensel on May 26, 2021 titled 'Bhutan receives 5,850 Pfizer doses'. 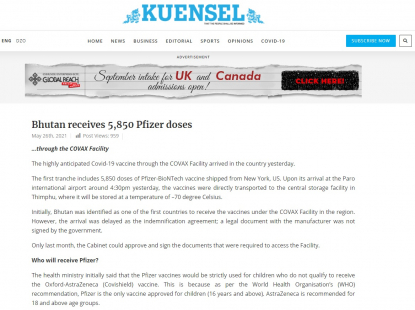 Screenshot of the Kuensel article captured on June 8, 2021

The article reads in part as: "The highly anticipated Covid-19 vaccine through the COVAX Facility arrived in the country yesterday."

"The first tranche includes 5,850 doses of Pfizer-BioNTech vaccine shipped from New York, US. Upon its arrival at the Paro international airport around 4:30pm yesterday, the vaccines were directly transported to the central storage facility in Thimphu, where it will be stored at a temperature of –70 degree Celsius."

Minister Jayasumana was not the only Sri Lankan government official to misleadingly announce that Sri Lanka was the first South Asian country to receive Pfizer jabs.

The tweet has since been deleted and replaced with this tweet which accurately notes that Sri Lanka became the first country in South Asia to purchase Pfizer.

Great news this morning as #SriLanka becomes the first country in South Asia to purchase a contingent of #Pfizer vaccines. I am proud of the work that is being done by my government to ensure vaccines for all Sri Lankans. Vaccination continues throughout the country

Speaking at a political talk show on local TV on July 5, 2021 Minister Jayasumana clarified his misleading statement from the 42-minute 6-second mark of this video, saying: "If you listen closely you will observe that I mention that we had to undergo an extremely competitive process to place the order for five million doses. If someone misunderstood it to mean that this has not been used in any South Asian country before, it was a lapse in my communication."