It shows a newspaper report that quotes Khairy Jamaluddin, the Malaysian coordinating minister for Covid-19 immunisation. He is also the minister for science and technology.

“My question to the health minister khairy Why there is differential vaccine for non-muslims & Muslims?

“I hope there is good explanation for this differential matter from the Health Minister.” 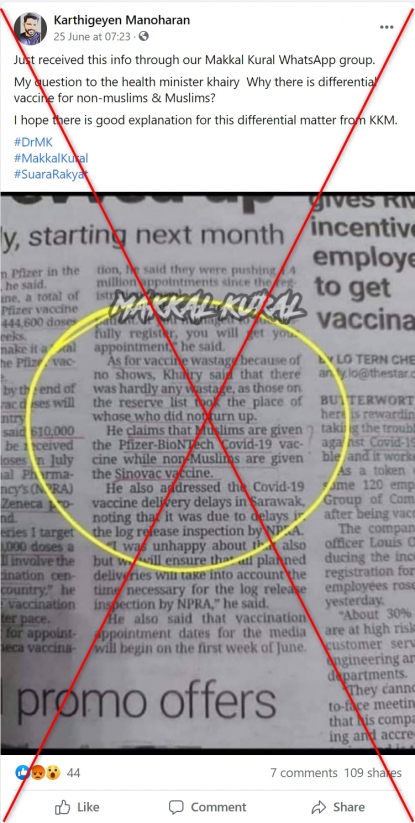 As of July 7, 2021, the Malaysian government is administering Covid-19 vaccines developed by Chinese pharmaceutical company Sinovac, US multinational company Pfizer and UK pharmaceutical firm AstraZeneca to its citizens.

The print edition of the article, headlined “Vax rollout to be revved up,” was published by Malaysian newspaper The Star on May 28, 2021. That version was archived here.

The Star later published a correction of the article on May 28, 2021.

The correction's first three paragraphs read: “We refer to the article ‘Vax rollout to be revved up’ on The Star Online.

“In the article, we inadvertently omitted the words ‘strongly denied’ in a quote attributed to National Covid-19 Immunisation Programme coordinating minister Khairy Jamaluddin.

It also carried a correction note at the end of the report.

It reads: “Note: The word ‘denied’ was inadvertently omitted from the prior version of this story. We apologise for the earlier omission.”

The Star Media Group’s chief content officer Esther Ng Sek Yee told AFP on July 1, 2021: “We have published a correction immediately upon realising the mistake. We were up-front about the error. We urge the people to stop passing this around since there was a retraction, and tell the full story.”