Two photos of oranges spiked with nails have been shared hundreds of times on social media alongside claims implying they were recently used by criminals to rob motorists in Gauteng province, South Africa. But this is misleading: AFP Fact Check traced the photos back to 2016 articles and posts making the same claim in Malaysia. Meanwhile, the Gauteng traffic police department said that it had not received reports of such ploys being used by robbers in recent times.

The claim was posted in a public Facebook group called “Boksburg Community Group” on June 24, 2021. Boksburg is located in Gauteng province.  The post has been shared more than 200 times since it was first published. 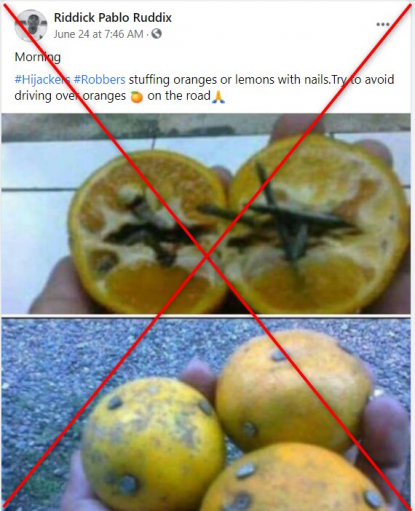 It includes two photos showing oranges spiked with nails and warns motorists to avoid running over oranges on the road because it is a tactic being used by “hijackers” and “robbers”.

The photos were also published on Twitter by a user named “Minister of Illegal Immigrants in SA” alongside a screenshot making the same claim.

However, these are not recent photos from South Africa.

Photos shared in 2016 in Malaysia

By conducting a reverse image search, AFP Fact Check found that the photos were previously published on a number of websites and in social media posts in Malaysia and Indonesia, going as far back as 2016.

A few days later, the pictures were also published again here on Facebook in Malaysia. In 2017, they were used in articles on Indonesian news sites (here and here).

No reports of incidents in Gauteng

Gauteng’s traffic police department said that it was not aware of any such devices being used in the region, which encompasses Johannesburg and Pretoria.

“We have not received any reports from patrol officers, motorists, and the public in the recent past about robbers using such tactics on motorists in the wider Gauteng region,” said Sello Maremane, a spokesman for the Gauteng traffic police department.