A video of football star Cristiano Ronaldo has been viewed millions of times in multiple posts that claim it shows him refusing to shake hands with an Israeli man in a bid to show solidarity with Palestinians. The claim is false: the clip shows Ronaldo removing his silver medal after his team Juventus lost the final of the Italian Super Cup in December 2019. The man in the video was the then Italian ambassador to Saudi Arabia. 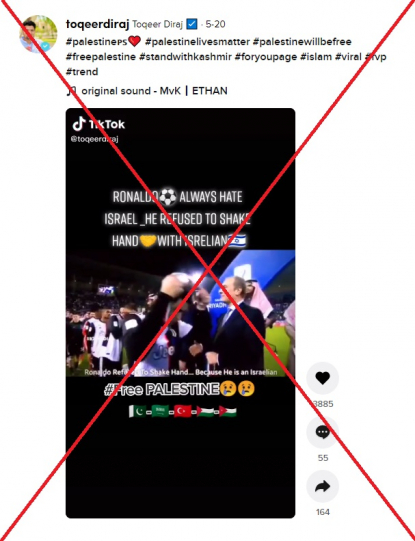 The text superimposed on the clip reads: “Ronaldo always hate Israel _He refused to shake hand with Isrelian #Free PALESTINE”.

The video circulated online as conflict escalated between Israel and Palestinian armed groups in May 2021, AFP reported here and here.

The video was viewed more than three million times after it also appeared with a similar claim here and here on TikTok; here on Facebook; here on Twitter; and here on YouTube.

It has also appeared in a similar claim in Indonesian here on TikTok; here on Facebook; here on YouTube.

The clip also garnered more than 1.3 million views after it was posted here on TikTok and here on Instagram with an English-language claim that says Ronaldo “ignored” the Israeli prime minister.

"Ronaldo's not one for silver medals, is he?"

CR7 was not having it. Straight off. pic.twitter.com/oy81C82xQO

“CR7” is the nickname of Ronaldo, a combination of his initials and his squad number at Juventus.

Below is a screenshot comparison of the clip in the misleading post (L) and the Football on BT Sport video (R):

“Cristiano Ronaldo has come under fire after taking off his silver medal straight after receiving it following Juventus’ loss in the Italian Super Cup,” the AFP report reads.

“Video of the incident immediately went viral, showing the Portuguese star taking off his medal seconds after having it placed around his neck.

Man in the video

AFP found that the man in the video was Luca Ferrari, who served as Italian ambassador to Saudi Arabia from 2016 to 2019.

Ferrari is now the Italian ambassador to China, as the website of the Italian embassy in Beijing shows here.

He was also pictured in Getty Images photos of the 2019 football event here and here.

Below is a comparison between the screenshot of Football on BT Sport’s video (L), the Getty Images photo (C) and Ferrari’s photo on the Italian embassy's website (R):

Comparison between the screenshot of Football on BT Sport’s video (L), the Getty Images photo (C) and Ferrari's photo on the Italian embassy’s website (R)

AFP has debunked another false claim using another video that purportedly shows Ronaldo refusing to shake hands with the Israeli president here.