A video has been viewed millions of times on TikTok, Facebook, YouTube and Twitter alongside a claim it shows Portuguese footballer Cristiano Ronaldo refusing to shake hands with Israel’s president. The posts claim Ronaldo's gesture was an attempt to show support for Palestinian Muslims after the conflict escalated between Israel and Hamas. The claim is false: the clip actually shows Ronaldo not shaking hands with Michel Platini, then Union of European Football Associations (UEFA) president. The footage was filmed after Ronaldo's former club, Real Madrid, won the FIFA Club World Cup final in 2014.

It has been viewed more than 9.6 million times.

The text superimposed on the clip reads: “Cristiano Ronaldo doesn’t gave his hand to the President of Israel because he supports the Muslims.” 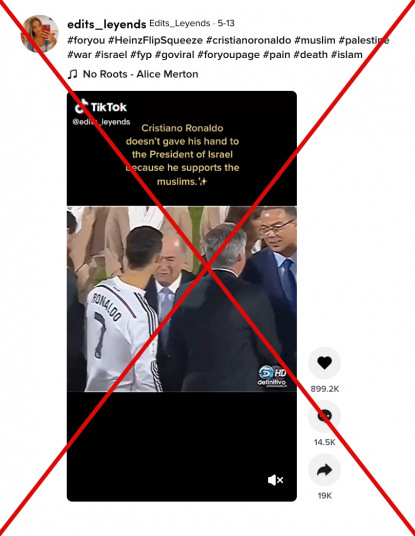 The clip circulated online after an escalation in the conflict between Israel and Hamas in May 2021, as AFP reported here and here.

It has been viewed more than 49,000 times after it appeared with a similar claim in Indonesian on Facebook here, here and here; on YouTube here; and on Twitter here.

This claim, however, is false.

“The Real Madrid talisman is seen walking past the Frenchman after collecting his medal following Madrid's 2-0 victory over San Lorenzo to become world champions for the first time in their history.

“After shaking hands with FIFA's Sepp Blatter, he proceeds to walk straight past Platini, who was in the process of congratulating Carlo Ancelotti, the Madrid manager.”

Platini is a former French football star who served as president of the Union European Football Associations (UEFA) from 2007 to 2016.

AFP photos of Platini can be seen here and here.

Below is a screenshot comparison of the clip in the misleading post (L) and the Daily Mirror’s video (R):

It came after Platini said that the prestigious Ballon d’Or award should be given to a player in Germany’s World Cup-winning team instead of Ronaldo, as reported here and here.

However, days later, UEFA spokesman Pedro Pinto told Portuguese newspaper Diario de Noticias there was no problem between the Real Madrid star and the UEFA president.

“There was never any problem. Cristiano Ronaldo, before receiving the Silver Ball, had greeted Mr Platini," Pinto was quoted in the report dated December 22, 2014.

“When he returned to the stage to receive his medal with the rest of the team, Michel Platini was talking with Carlo Ancelotti, so Ronaldo passed him without acknowledging him.”

Ancelotti was the Real Madrid manager at that time.

AFP has debunked other false claims related to the footballer’s alleged solidarity with Palestinians, such as here and here.