A photo of a police officer armed with a pepper ball gun has been shared in multiple posts on Facebook by pages with thousands of followers alongside a claim that he was “hiding in a dark corner, shooting without warning". The claim is misleading; a wider angle shot of the same scene shows the officer standing next to a large group of journalists in Kwun Tong, Hong Kong; local media footage of the incident shows no evidence that the police officer fired his pepper ball gun in this location when the photo was taken.

The photo was published here on Facebook on August 25, 2019 by Facebook page “One country one system. Liberate Hong Kong”, which has almost 8,000 followers. It has been shared 86 times.

The traditional Chinese-language caption translates to English as: “Hiding in a dark corner, shooting without warning and targeting people’s heads and eyes. Are they restoring order in public places, or destroying public order? Photo: Stand News. #PoliceScum #HongKongAddOil #HongKongerAddOil #SaveOurHongKongOurselves”."

Hong Kong’s ongoing protests turned violent on August 24, 2019, after police fired tear gas and deployed batons in dispersing protesters, who fought back with stones, bottles and bamboo poles in the Kwun Tong neighbourhood. Here is an AFP report about the Kwun Tong clashes.

Police have faced increasing brutality claims during the protests, as detailed in this AFP report. 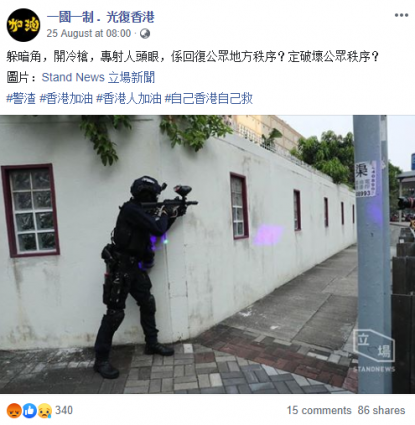 The photo has also been shared dozens of times here and here with a similar claim by Facebook pages with thousands of followers.

The claim is misleading; a wider angle photo of the same scene shows the police officer was standing on a street next to a group of journalists.

The watermark for Stand News, a Hong Kong-based online news site, is visible on the photo. The same photo was published here on Stand News’ Facebook page on August 24, 2019, without a caption.

Earlier on August 24, Stand News uploaded a separate image from the scene here. The image is embedded below.

This image, which was shot from a wider, higher angle, shows the same police officer armed with a pepper ball gun standing next to a group of journalists.

“After the protest at Kwun Tong MTR station this afternoon, some protesters have set up barriers in the Ngau Tau Kok and Kowloon Bay area. Riot police have been deployed accordingly.”

Below is a comparison of the two Stand News photos taken at the same location:

A street sign for “Wai Yip Street” can be seen in the Stand News photo on the right.

The photo was captured here. The same location can be seen below on Google Street View.

A journalist in AFP's Hong Kong bureau analysed this footage from local media outlet HK01 of the same police officer and found no evidence that he fired his pepper ball gun on Wai Yip Street when the photo was taken. The footage is embedded below.

The police officer can be seen from the three hours, 58 minutes and 23 seconds mark. At this point, a journalist can be heard speaking over the footage in Cantonese as the camera zooms in on the police officer. Her comments translate to English as: "We see a Special Tactical Squad member holding a gun towards protesters."

After ten seconds of pointing his gun towards protesters, the same officer lowers his gun. A loud noise can be heard in the background at this point, prompting the HK01 journalist to say in Cantonese: "We have heard a gun shot."

About two seconds later, the officer then raises his gun again but does not fire, as journalists gather around him. Two seconds later, he lowers in his gun and walks away. Below is a screenshot of the sequence:

Three screenshots showing the sequence in the HK01 video