A video which appears to show large swirling clouds over a city has been viewed hundreds of thousands of times in multiple Instagram posts, alongside a claim that it shows Hurricane Dorian off the coast of the Bahamas. The claim is false; the clip is a computer generated video which was published in May 2019, more than three months before the hurricane hit the Bahamas.

The video was published here on Instagram on September 1, 2019.

AFP reported on the storm here on September 1 as the hurricane made landfall in the Bahamas. 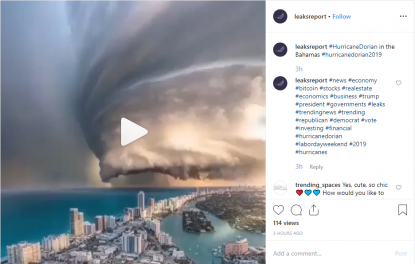 The video has also been viewed hundreds of thousands of times here, here and here in Instagram posts with a similar claim in English and Portuguese.

The claim is false; the clip is a computer generated video which was created in May 2019.

A reverse image search on Google found the same video published in this May 20, 2019, Instagram post with the caption; “Amazing animation edit to my artwork from @theglitch.og”.

The Instagram user, US-based photographer Brent Shavnore, told AFP in an email on September 2 that the video is an animated version of a composite image he created.

The email reads: “Yes Instagram user TheGlitch was the person who animated the storm. I combined the two Shutterstock pictures together to create the artwork. That video on YouTube is my tutorial explaining how it's done.”

Shavnore told AFP he created the image using two stock photos, which he posted on Instagram here on April 13.

He said the image was a composite of this aerial view of South Beach in Miami and this picture of storm clouds.

Shavnore also uploaded this tutorial to YouTube on March 31, 2019, which shows how he created a similar composite image in Photoshop.

Parts of the caption of the Instagram post states: “Photos taken by @shavnore. Animation by TheGlitch @theglitch.og”.

Florida-based TheGlitch told FP via Instagram Direct Message on September 3: “Yes, I added the animation for this photo by Shavnore. I use @Plotaverse for the motion of it and when I made it was the day before I posted it.”

Plotaverse is an app used to create animated photos.