This video shows a woman complaining about conditions in Indian Kashmir

A video shot inside an airplane has been watched thousands of times in social media posts that claim it shows a woman confronting former Indian opposition leader Rahul Gandhi, telling him not to visit Kashmir and praising Prime Minister Narendra Modi. The claim is false; the woman in the video is actually complaining to Gandhi about conditions in Indian Kashmir.

The English language caption of the post says: “Kashmir people in flight to Rahul: Modi is doing good for us. Why do you want to visit Kashmir and trouble us? Please go back.!” 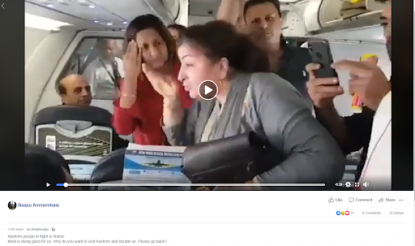 The video has also been shared in Facebook posts here and here, alongside similar claims.

Nowhere in the 30-second clip does the woman mention Modi or tell Gandhi not to visit Kashmir.

This is a full transcript of the remarks by the woman in the video: “Very young kids who study in the school are not able to move out of their homes. When they go out, they cannot find each other. My brother is a heart patient. He went to look out for his children, his whereabouts were not known for 10 days. We are in deep trouble.”

The original video was posted on Twitter here by News18 journalist Arun Kumar Singh on Twitter on August 24, 2019.

"A women is apprising @RagulGandhi of her difficulties on-board a return flight from Srinagar," the Hindi-language tweet says.

A video of the woman from a different angle was posted here the same day on the verified Twitter account of Radhika Khera, the media coordinator for Gandhi’s Indian National Congress party.

The accompanying Hindi caption says: “Hear the pain of Kashmir.”

The incident occurred on August 24, when Rahul Gandhi and several other Indian politicians were returning from Srinagar after local authorities denied them entry to the city.

It's been 20 days since the people of Jammu & Kashmir had their freedom & civil liberties curtailed. Leaders of the Opposition & the Press got a taste of the draconian administration & brute force unleashed on the people of J&K when we tried to visit Srinagar yesterday. pic.twitter.com/PLwakJM5W5

No, all of Indonesia's airports must be state-owned by law