This academic was appointed at Indonesia’s Asian Cyber University

Several Indonesian-language Facebook posts that have been shared hundreds of times claim that a Korean academic has been appointed rector of State University of Jakarta (Universitas Negeri Jakarta). The claim is misleading; the academic was actually appointed to lead Indonesia’s Asian Cyber University.

One post was published here on Facebook on August 27, 2019. It has since been shared more than 460 times. 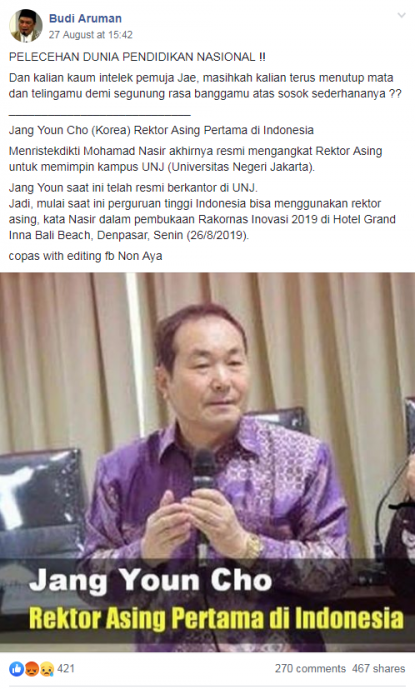 Translated to English, the post caption reads:
“AN ABUSE TO THE NATIONAL EDUCATION!!

​“And all of you intellectuals who worship Jae, are you still closing your eyes and ears for your pride on his modest figure??
Jang Youn Cho (Korea) First Foreign Rector in Indonesia

​“So, starting from now, a university in Indonesia can be led by a foreign rector, said Nasir during the opening of 2019 National Coordination Meeting for Innovation at Grand Inna Bali Beach Hotel, Denpasar, Monday (26/8/2019).”

“Jae” is a mocking reference to Indonesian President Joko “Jokowi” Widodo used by supporters of his political opponent, Prabowo Subianto, as explained in this Indonesian-language article.

The misleading claim has also been shared in other Facebook posts here, here and here.

Jang Youn Cho is taking a senior management position at an Indonesian university, but news reports show he has been appointed to lead a different Jakarta-based university.

The report also states: “Asian Cyber University is a collaboration between National University and Hankuk University of Foreign Studies Korea. The foreign rector he introduced was Jang Youn Cho.”

A reverse image search on Google found the photo of Jang Youn Cho also appeared alongside this August 29, 2019, article by local media outlet Tribunnews under the headline: “This Is the First Foreign Rector Recruited by Jokowi Administration”. 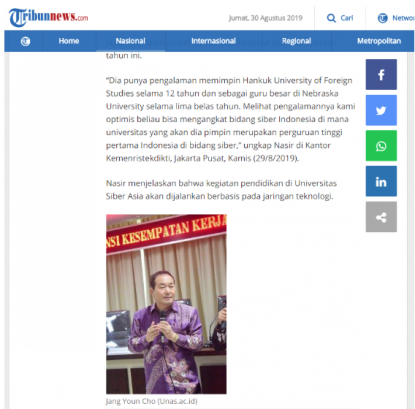 The photo above was credited to the National University website and can be found in a March 27, 2018, post, here.