This headline about Indonesian singer Rhoma Irama has been digitally altered

Multiple Facebook posts shared hundreds of times purport to show a screenshot of an article about a popular Indonesian musician, which claims he blamed himself for his son’s drug abuse. But the image in the posts has been doctored from a genuine news report; the original report's headline only stated the musician "accepted" his son was detained for drug use.

The doctored screenshot was published in this July 26, 2019 Facebook post about Indonesian singer Rhoma Irama. It shows a purported news report from Indonesian news outlet Liputan6.com.

The Indonesian language headline translates to English as: “Rhoma Irama: This Is My Fault, I Told Him Not to Touch Alcoholic Drinks, Not Even a Drop.. But He Ended Up Consuming Crystal Meth.”

The post’s Indonesian-language caption translates to English as: “Pak Haji, please be clear when you advise your son... So that he can fully understand what you mean….” 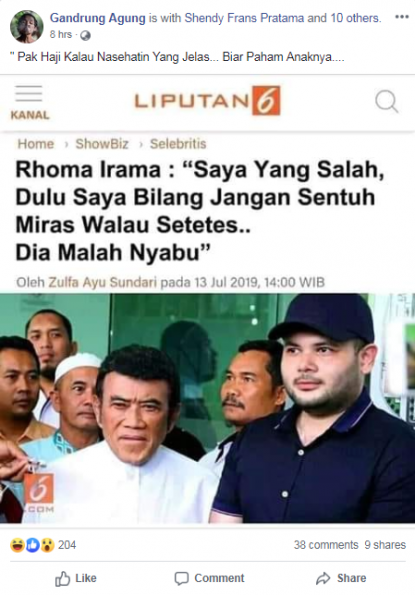 The image was also shared hundreds of times in posts here, here and here.

The claim is false. A keyword search found this fact-check article published by Liputan6.com about the image on Facebook.

Liputan6.com operates a fact-check team which has been verified by the International Fact Checking Network (IFCN).

The article's headline translates to English as; “A hoax misusing a Rhoma Irama statement in a Liputan6.com article”. The article states the image was doctored from this Liputan6.com news report published on  July 13, 2019. The headline translates to English as: “Rhoma Irama accepts the fact that Ridho Rhoma is detained again.”

The first two paragraphs of the original report translate to English as: “Ridho Rhoma has to go to prison for the second time. Based on a Supreme Court ruling, Ridho Rhoma must return to the detainment centre for eight months for drug abuse.

“Ridho Rhoma will be detained at the Salemba detention center, Central Jakarta. As a father, Rhoma Irama found it difficult to accept this reality. But the King of Dangdut said he had finally accepted it.”

Dangdut is a popular genre of Indonesian music that mixes local, Indian and Malay traditions. “The King of Dangdut” is a nickname given to Rhoma.

Ridho’s detention was also reported by Indonesian news site Kompas on July 12, 2019, here. This is his Instagram account.

Below is a screenshot of the original news report: A screenshot of the original Liputan6.com report

It has the same layout, byline, publishing date and time as the Facebook image -- but the headlines are different.

Below is a comparison of the original Liputan 6 report (L) and the misleading Facebook image (R):
​ 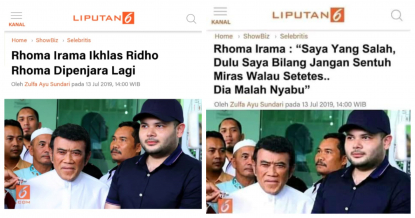 This CCTV footage shows a robbery in Romania, not Malaysia