This video shows Indian and US troops staging a mock drill in 2016, not clashes in Kashmir

A video has been viewed thousands of times in multiple posts on Facebook and Twitter published in August 2019 which claim it shows Indian soldiers firing lethal shots at militants in Indian-administered Kashmir. The claim is false; the video was taken from a TV broadcast of a mock drill by Indian and US troops staged in 2016.

The video was published here on Facebook on August 4, 2019.

It has been viewed more than 900 times. 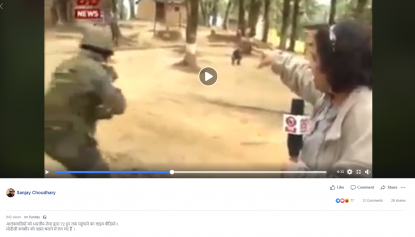 The post’s Hindi language caption translates to English as: “Watch the live encounter video of how the Indian Army is sending the terrorists to 72 splendid women companions in heavens. Modi has already started turning Kashmir into paradise.”

The same video was published here and here on Facebook with a similar claim.

It was also shared on Twitter here with a similar claim.

The claim is false; the video has circulated in media reports since 2016 and a mock drill by Indian and US troops.

In the top left corner of the video, a logo for India’s national broadcaster Doordarshan News, also known as DD news, can be seen.

The video, which is two minutes and two seconds in length, is titled; “Know how Indian Army carries out search operations in Kashmir valley (Hindi)”.

The caption states: “Do you know how our security forces carry out Cordon and Search Operations in the valley in J and K? How do our forces proceed when they receive an input that terrorists are hiding in a house in a village? Our Correspondent Nandita Dagar explains.’

The YouTube video corresponds with the video in the misleading posts from the 25 seconds mark until the one minute 21 seconds mark. At the beginning of the clip, the anchor’s comments in Hindi translate to English as: “Do you know how cordon and search operations are carried out in Jammu and Kashmir? When security forces receive an input that terrorists are hiding in a house in the village then how do they react, our correspondent Nandita Dagar presents a special report.”

The reporter’s subsequent comments in Hindi translate to English as: “When Army has decided to launch the search party, the village headman made an appeal to all the villagers to evacuate."

“People were angry, and whenever the locals are angry, they protest and argue with armed forces, there is a higher probability of terrorists hiding in there. Security forces are searching every house and gunshots are heard.”

“Over there two terrorists are running and security forces have gunned them down. Locals are being asked to assemble by Army to identify that none of the terrorists are hiding in disguise as locals or has escaped as a civilian. The medical team arrives with relief material and refreshments to take care of the people.”

The anchor can then be heard saying: “This entire operation is really sensitive and how the army takes care of locals in between an encounter is also considered.”

Below is a screenshot of the video at the point, with the star logos highlighted with a red square: 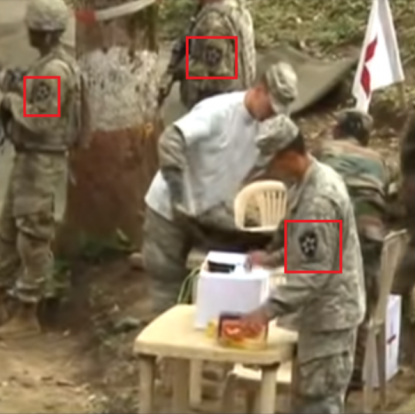 In this press release published on September 26, 2016, India’s Ministry of Defence also shared information about the joint exercise called ‘Exercise Yudh Abhyas 16’ which translates into English as: 'Exercise for war practice 16'.

The US Army also published this report about the exercise on its official website on September 20, 2016.