German solar, wind power did not fail in cold weather

Posts shared more than 200,000 times on Facebook in February 2021 allege that Germany’s renewable energy supply failed after snow covered solar panels and wind turbines froze. This is false; figures show that the country’s electricity production from these sources experienced no significant decrease, and the photo used to illustrate the claim was taken in Russia.

“Germany’s millions of solar panels are blanketed in snow and ice,” one Facebook user wrote in a February 11, 2021 post that included a photo of a snow-covered solar panel farm, adding: “It’s 30,000 Wind Turbines are not turning in the Freezing, Windless Weather...COAL plants to the RESCUE!” 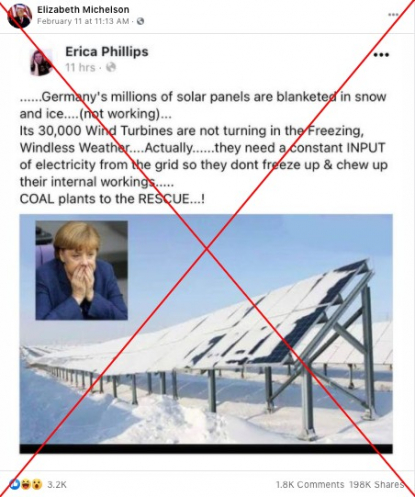 In a comment on the post, another user said, “So much for the green new deal saving the planet,” drawing a parallel with the United States, where renewable energy was wrongly blamed after the heart of the American oil industry, Texas, bore the brunt of outages during a deadly winter storm.

Another comment echoed the sentiment and referred to US President Joe Biden: “Tell that to the Joe. And to The ones who voted for him.”

But the claim that solar panels do not work in winter -- which also circulated on Facebook here, here and here in the United States, which has been hit by severe winter weather -- is false.

There was no significant drop in electricity generation from renewables in Germany in February 2021, as shown by these charts from the country’s Fraunhofer Institute for Solar Energy Systems that compare input from various energy sources.

“The claim that millions of PV (photovoltaic) modules don't provide electricity in winter is of course nonsense,” Karsten Schafer, a spokesman for the German Solar Industry Association, told AFP in an email.

According to Schafer, snow is not an issue because as soon as the first rays of sunlight hit snow-covered modules, the dark solar cells behind the glass surface of panels heat up, thawing the snow which then slides down due to the panels’ sloped inclination.

A reverse image search shows that the photo used in the Facebook posts was a screenshot of a video panorama published in 2017 on stock photo website Shutterstock. Russian photographer Alexey Murzin said via WhatsApp that he took the photo “in 2015 or 2016” near the Russian city of Orsk.

Despite that, he said extra operational costs from cold weather conditions did not impact the solar power plant’s profitability overall.

On claims that 30,000 wind turbines were idle in Germany, Wolfram Axthelm, managing director of the country’s Wind Energy Association, said by email that “the claim that weather conditions would cause thousands of wind turbines across the country to stand mostly idle is simply false.”

Over the weekend of February 6 and 7, when temperatures dipped below 14 degrees Fahrenheit (-10 degrees Celsius), the amount of electricity generated from wind was actually above the monthly average, Axthelm said.

The Green New Deal, mentioned in one of the Facebook comments, is a congressional effort that would provide an all-encompassing roadmap for tackling climate change.

President Joe Biden has shown interest in implementing some of its provisions in his push to put the world “on a sustainable climate pathway to protect Americans and the domestic economy from harmful climate impacts.”