Machakos University is not launching a degree in witchcraft

Multiple articles and widely shared social media posts have alleged that Kenya’s Machakos University is launching a degree in witchcraft. But this is false: AFP Fact Check found the story stems from a satirical website. The university has also refuted the claim and there is no such course listed on its official website. 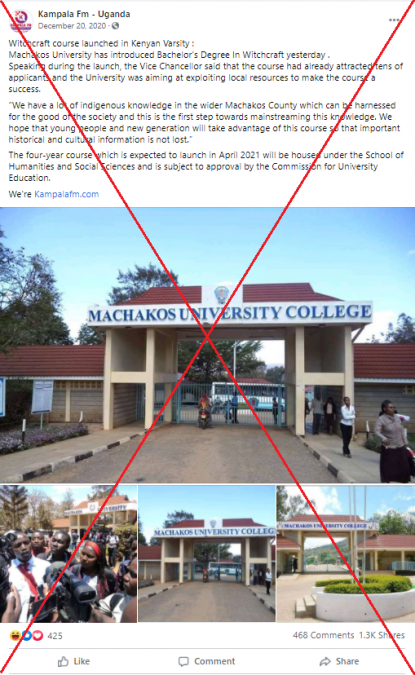 A basic internet search shows that the claims originated from a December 18, 2020 article on satirical website PostaMate, headlined: “Machakos University Launches A Bachelor’s Degree In Witchcraft”.

While the website is clearly described as a “home of satire and sarcasm”, the subsequent social media posts and articles presented the claims as factual. 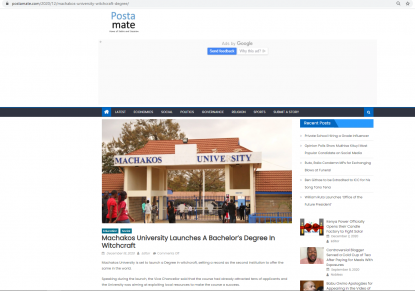 A screenshot of the satirical article on PostaMate taken on February 4, 2021

The website tweeted the blog with the following caption: “Machakos University has remained true to its roots; now introducing a degree in witchcraft.”

Machakos University has remained true to its roots; now introducing a degree in witchcraft.https://t.co/FoJHLBmMCG

The tweet did not carry a satire disclaimer, potentially raising the risk that some could interpret the story as factually accurate.

Witchcraft is a strong part of Machakos County’s history -- research papers here and here detail some of the region’s past which could explain why this university was the subject of the rumour.

A 2011 African studies textbook, for example, explains how in the mid-1950s in Machakos, colonial authorities tried to cleanse the practice by requesting that Kamba witches and witch doctors publicly renounce witchcraft and surrender their paraphernalia to be burned.

“In return, witches and witch doctors could expect amnesty from the government and a clean slate from their neighbors”, the book’s summary reads.

University not offering courses in witchcraft

The Kenyan university -- on its official Facebook page linked to its website -- posted a screenshot of the satirical article with a banner labeling it “fake” on December 20, 2020.

Machakos University spokesman Adam Shisia told AFP Fact Check that the institution was not offering a course in witchcraft.

He said it was a misinterpretation of a unit in a Master’s course which was “captured wrongly as a course by the media and wrongly escalated as so”.

"The unit exists in a course but there is no course in which you will say that a student will graduate in a degree in witchcraft," Shisha said.

He added that the curricula of most universities across the world have units in art courses referring to witchcraft -- “but they are not said to be offering courses in witchcraft”.

A search of “witchcraft” on the university website shows a Masters of Arts course called “Religion, Witchcraft, Magic, and Science”.