After nearly a month of conflict between Ethiopia’s government and dissident Tigray forces, a post circulating on Facebook purports to show corpses of Ethiopian soldiers killed by the army of the Tigray People's Liberation Front (TPLF). The claim is false; the image in the post was taken from the 1984 movie Red Dawn.

The image was posted on Facebook on November 22, 2020, soon after the Ethiopian Prime Minister Abiy Ahmed gave forces in the northern Tigray region a three-day ultimatum to surrender before a “final” offensive on the region’s capital, Mekele.

Written in Amharic, the post’s caption translates into English as: “I did not want to post this, but because you’ve called me a liar, there you go, seeing is believing”. 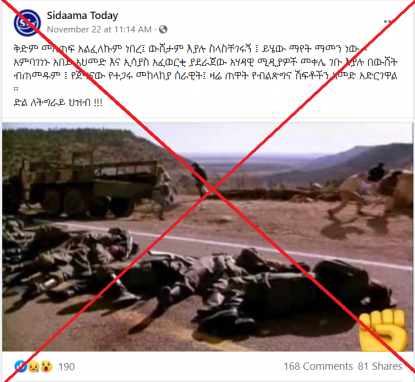 “Although state media backing dictators Abiy Ahmed and Isaias Afwerki have been busy falsely announcing they entered Mekele, as of this morning, the heroic army has reduced to ashes the Prosperity bandits. Victory for the people of Tigray”, the post concludes.

The TPLF has accused Ethiopia of enlisting help from Eritrean President Isaias Afwerki in the conflict, which Abiy's government has denied.

The same post was also published here on Facebook with the same caption. Both accounts appear to support the TPLF.

The image shows at least six men, seemingly wearing military uniforms, laid out on the ground, while people in the background appear to be fleeing the scene. A military truck is also parked on the left of the image.

However, this photo is unrelated to the ongoing conflict in Ethiopia and does not show casualties from either side. The image was taken from the movie Red Dawn.

A YouTube video entitled “Red Dawn Battle Scene 1984 (Remastered)” shows the precise scene that was used in the misleading Facebook post. The exact same frame shared on Facebook can be seen two minutes into the video. 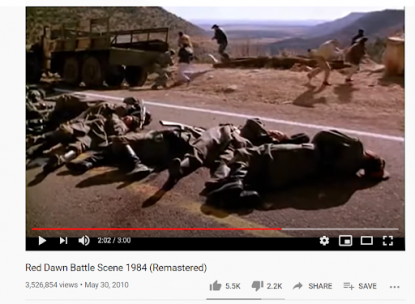 In the 1984 film, Soviet soldiers invade a small Colorado town, prompting two teenagers to escape into the forest where they decide to fight back.

The people laying on the ground in the footage are the fictional Soviet soldiers killed by the teenagers.

Relations between TPLF in Ethiopia’s north and the national government have been deteriorating since Prime Minister Abiy Ahmed came to power in 2018, with regional opposition leaders accusing his administration of discrimination.

More than 44,000 refugees have crossed into Sudan since the fighting broke out in Tigray, according to the UN refugee agency.

The federal army said its forces captured Tigray’s capital Mekele – the seat of the TPLF – on November 28, 2020.

"I am pleased to share that we have completed and ceased the military operations in the #Tigray region," Abiy said in a tweet. “Our focus now will be on rebuilding the region and providing humanitarian assistance while Federal Police apprehend the TPLF clique”, it reads.

Mekelle under command of the National Defense Forces pic.twitter.com/rj8GbK3ii8

Several hours after Ethiopian Prime Minister Abiy Ahmed declared that the military operations in the region were “completed”, Eritrea's capital Asmara was hit by rockets fired from the Tigray region.

The US embassy in Asmara said on November 29, 2020 that six explosions were heard in the Eritrean capital.

This marks the third time Asmara was hit since the conflict broke out in the region.