A photo purporting to show football legend Pelé grieving by the grave of Diego Maradona is circulating online following the icon's death on November 25. However, the image has been doctored and shows neither Pelé nor the late Argentine player's grave. 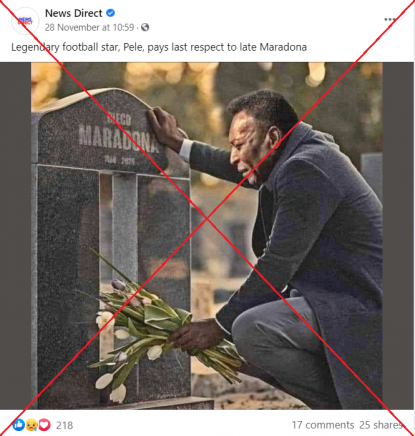 Renowned along with Pelé as one of the greatest footballers of all time, Maradona's death aged 60 from a heart attack on November 25 sparked an outpouring of emotion around the world, including in his native Argentina, where three days of national mourning were declared.

The image has been circulating on social media around Africa, including in Angola, Kenya and Madagascar, but also in Italy, where it was shared by former deputy prime minister Matteo Salvini.

While Pelé did indeed pay tribute to his former rival, tweeting that he hoped they would one day "play together in the sky", the photo does not show him kneeling at Maradona's grave.

A reverse image search using Yandex reveals the picture has been doctored from a stock photo of a man laying flowers at an unmarked grave, which is available on various sites such as iStockphoto, Getty Images and PeopleImages. Screenshot of original photo available from iStockphoto, taken on December 2, 2020

There are various visual similarities between the original stock photo and the doctored image, including the bunch of flowers, the shape of the tombstone and trees in the background. The doctored photo features warmer colours, while the man's hands have been darkened and Pele's face added. 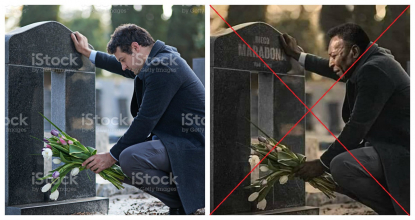 Furthermore, photographs from Maradona's burial on November 26, 2020 show that tombstones in the Jardin Bella Vista cemetery in Buenos Aires province, where he was buried, are flat and not vertical like the one shown in the picture.

Facebook users also pointed out that Pelé, 80, who has struggled with poor physical health in recent years, would have found it difficult to bend down.

He has suffered a series of hip problems and has taken to using a walker at his increasingly rare public appearances.