Skip to main content
Rescuers and people gather amidst the rubble in front of Al-Sharouk tower that collapses after being hit by an Israeli air strike, in Gaza City, on May 12, 2021. (Mohammed ABED / AFP)

A video has been viewed tens of thousands of times in Facebook posts that claim it shows Israeli air strikes during deadly fighting in Gaza in May 2021. The claim is false: the video  shows imagery from a war-themed online game and an unrelated clip that has circulated since 2009. 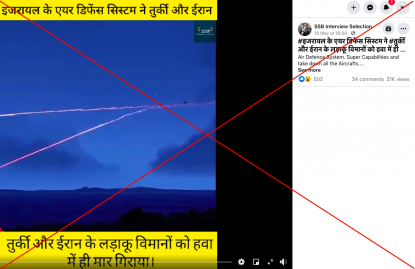 The video circulated as clashes between Israel and Hamas escalated in May 2021.

The video has also been shared here and here on Facebook alongside a similar claim.

The description of one of the videos translates to English as: “Phalanx Tomahawk The moment of a Cius CIWS Phalanx cruise missile being shot down by a BGM-109 Tomahawk ARMA3 cruise missile”.

At the end of the video, Japanese-language text appears on the screen which reads: “This video is fiction. The characters, names, and events are fictitious and have nothing to do with reality.”

Below is a screenshot comparison of the video in the misleading posts (L) and the YouTube videos (R): Bohemia Interactive, the company that developed ARMA 3, confirmed that the video was taken from the game.

“We’re confident that the footage in the YouTube video you linked is of Arma 3, made by one of our players,” the company told AFP.

“It’s worth mentioning that our Arma games can be modded (adapted) by users, and that people can create their own scenarios with the in-game editor.

“As such, what you’re seeing in this video is not the vanilla ‘out-of-the-box’ Arma 3 experience, but appears to be a modded version of the game and a custom scenario made by players.”

The final 30 seconds of the video in the misleading posts was taken from a clip posted online more than a decade before the Israel and Hamas conflict in May 2021.

AFP traced the footage to a YouTube video posted in July 2009 titled “CRAM firing in Iraq”.

AFP has debunked similar misleading claims in Portuguese and Spanish.