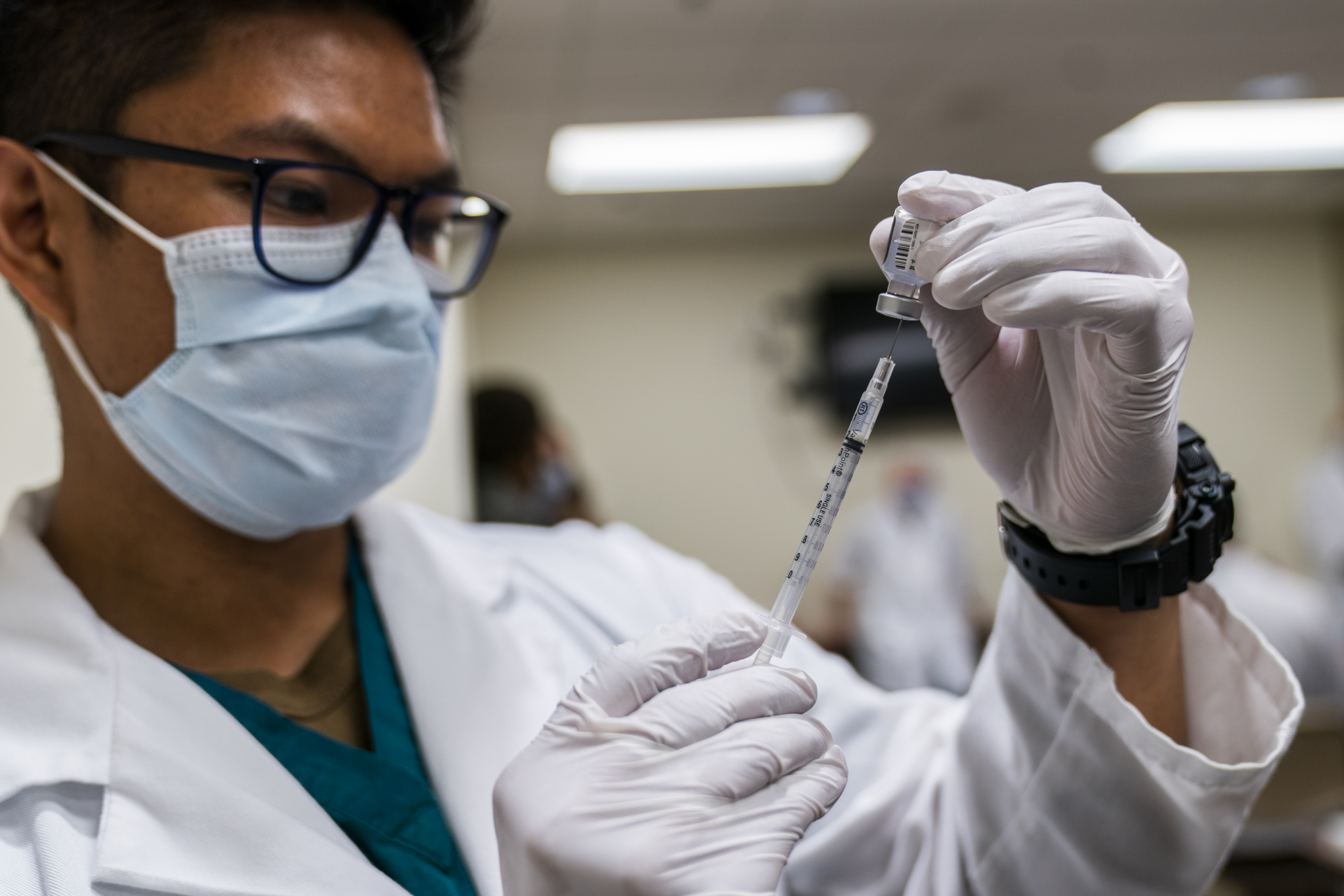 Multiple posts shared thousands of times on Facebook compare the groundbreaking speed of the discovery of a Covid-19 vaccination to research into HIV, cancer and the common cold. The claim is misleading; experts told AFP the development of a Covid-19 vaccine has been accelerated by past scientific achievements and repurposing existing technology. They also said there are significant differences between Covid-19, HIV, cancer and the common cold.

The claim was shared by an Australian-based Facebook user here. The post has been shared more than 460 times. 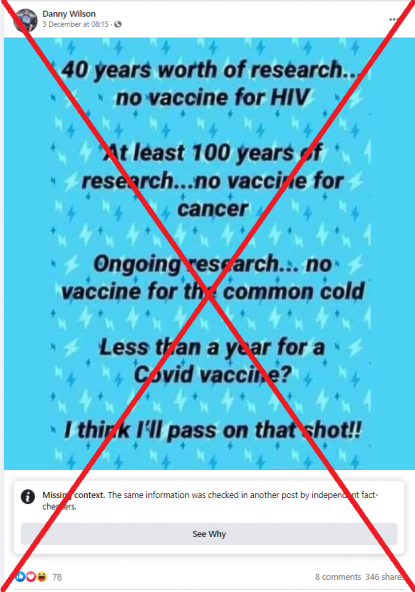 The post purports to compare the progress of developing a Covid-19 vaccine with other areas of medical research.

Sars-CoV-2, the virus that leads to the disease Covid-19, was first reported to the World Health Organization on December 31, 2019. The virus has since spread to almost every continent on earth, infecting more than 72 million people and killing more than 1.6 million people, according to Johns Hopkins University.

A similar claim was shared by Facebook users hundreds of times here, here and here.

Human Immunodeficiency Virus (HIV) attacks the cells in the body that help fight infections and diseases and can lead to Acquired Immunodeficiency Syndrome (AIDS). The virus is primarly contracted during unprotected sex and can be fatal.

However, medications now available for HIV prevent the degradation of the immune system and reduce the risk of disease associated with the virus. People who are HIV positive are now often able to live a healthy and long life. Some medications have been shown to even prevent the transmission of the virus. This page on the website for the Australian Federation of AIDS Organisations gives more details.

“HIV inserts itself into our DNA and remains there until those cells die, whereas SARS-CoV-2 does not. Also, HIV mutates at a much greater rate than SARS-CoV-2 so the immune response cannot control it,” she said in the December 14 email.

“The relatively good news about SARS-CoV-2 is that although this virus also mutates, it does not change as quickly as many other viruses (such as HIV, influenza, and rhinovirus, one of the viruses that causes the common cold) so the Covid-19 vaccines are more likely to be successful as the virus does not change fast enough to be able to escape the immune response the vaccines will produce.”

The American National Cancer Institute explains here that cancer is a collection of related diseases that are primarily caused by cells which begin to divide and spread to surrounding tissue. “As cells become more and more abnormal, old or damaged cells survive when they should die, and new cells form when they are not needed. These extra cells can divide without stopping and may form growths called tumors,” the website reads.

According to Professor Imrie, cancer is not a single microbe or change in the body, unlike Covid-19 which is caused by a single virus (Sars-CoV-2). Cancer can be caused by a plethora of different reasons including viruses, she said. “The fight against Covid-19 is easier as this is a disease caused by infection with one virus,” she said.

The common cold is caused by a number of groups of different viruses, including coronaviruses, RSV and parainfluenza, but rhinoviruses are the most common. Most of these viruses will lead to people becoming sick, but our immune systems will generally fight them off, according to the US Centers of Disease Control and Prevention (CDC).

After we have developed an immune response to a particular virus, we will often become immune to any future exposure to the same virus, but not to the other hundreds of other similar viruses, Imrie said.

Flinders University Associate Professor of Microbiology and Infectious Diseases Jill Carr told AFP in an email the common cold also is not perceived as “having a devastating impact” on the economy or public health. “Thus, in the environment of limited funding for research, the big impact diseases are given much more focus,” she said.

According to Professor Imrie, the mRNA vaccines for Covid-19 have been developed relatively quickly because the technology used in them has been in development since 2003 for other coronaviruses like MERS and SARS. “When those diseases seemed to disappear, vaccine funding dried up but some of the technology had been developed and was ready to apply to SARS-CoV-2 and COVID-19,” she explained.

“Also, basic research that has been going on in universities around the world, supported by government and by philanthropic organisations including Gates Foundation, resulted in discoveries that have been applied to the new COVID-19 vaccines,” she said.

Professor Carr said the amount of resources devoted to finding a vaccine, advances in technology and collaboration among scientists are all factors that have spurred progress towards finding a Covid-19 vaccine so quickly.

“These basic platforms... and scientific networks have expedited developing a COVID-19 vaccine candidate, and the streamlining of the process that couples basic science to clinical trials, regulatory approval and manufacture have helped all these different arms of the process work together.

“The financial risk has been mitigated by political support for guarantees of outcomes for manufacturers' investment, so pharmaceutical companies have lower risk for taking on the vaccine candidate for manufacture,” she said.