Skip to main content
Monosodium glutamate (MSG) products of the Ajinomoto food company are displayed at a supermarket in Tokyo on January 20, 2020. (AFP / Behrouz Mehri)

A claim that monosodium glutamate (MSG), a popular food additive, contains a pork ingredient and should not be consumed by Muslims has been shared thousands of times in multiple Facebook posts in 2021. The posts include a screenshot of a news article that reports on a company having to withdraw its MSG from Indonesia after pig enzymes were discovered. The posts, however, omit important context: the article is two decades old and reports on an isolated incident in 2001 involving Ajinomoto, a Japanese company that quickly regained its halal certification that same year.

The claim and screenshot of the news report were published on Facebook here on January 20, 2021. The post has been shared over 8,000 times.

Part of the post’s Tagalog caption translates to English as: “MSG… contains pig saliva but you followers of Allah still don't want to believe me and continue to use it.” 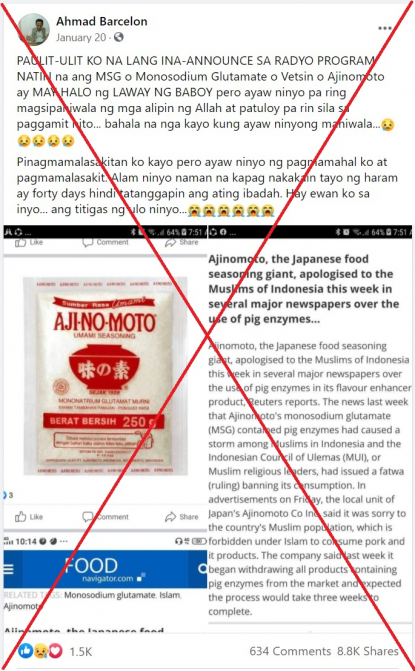 A screenshot of the misleading post, taken on March 18, 2021

The news report seen in the screenshot reads: “Ajinomoto, the Japanese food seasoning giant, apologised to the Muslims of Indonesia this week in several major newspapers over the use of pig enzymes.”

The article adds that “Ajinomoto’s monosodium glutamate (MSG) contained pig enzymes had caused a storm among Muslims in Indonesia and the Indonesian Council of Ulemas (MUI), or Muslim religious leaders, had issued a fatwa (ruling) banning its consumption.”

In Islam, the consumption of pork and products derived from pigs is forbidden.

The news report was also shared alongside a similar claim on Facebook posts here and here.

The posts, however, omit important context.

A Google keyword search found the news report was published by FoodNavigator.com here on January 12, 2001, two decades ago.

At the time, AFP also covered Ajinomoto’s use of pig enzymes and reported that the company regained its halal label in February that same year.

Ajinomoto “has resumed production a month after a row triggered by its use of a pig enzyme in its manufacture,” AFP reported on March 2, 2001.

“Ajinomoto’s loss of its Halal (fit for consumption by Muslims) label in late January caused an uproar in Muslim-majority Indonesia, where the flavor enhancer is used in almost every household and restaurant.” 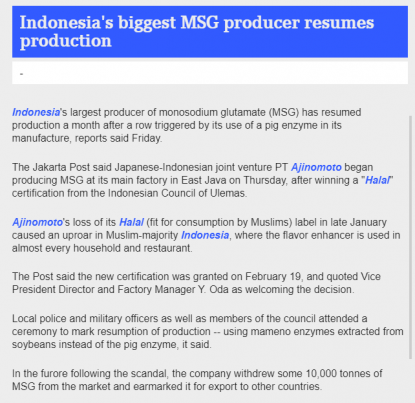 As of March 18, 2021, Ajinomoto’s MSG maintains its halal label in Indonesia, as seen in this document published by the Indonesian Ulema Council.

AFP has previously debunked misinformation around halal products in Indonesia, India and Singapore; as well as misleading claims about MSG safety.