Skip to main content
Motorists queue at the Otara testing station after a positive COVID-19 coronavirus case was reported in the community as the city enters a level 3 lockdown in Auckland on February 15, 2021. (Photo by DAVID ROWLAND / AFP)

A video posted on Facebook by a New Zealand-based anti-lockdown page makes a number of claims, including that Covid-19 vaccines are the “most rushed vaccines ever”. The claim is misleading: according to experts, Covid-19 vaccines have been developed in ground-breaking time because governments have poured unusual amounts of resources into the development process.

The video was uploaded to Facebook by the New Zealand-based anti-lockdown page, NZ Liberty, here. The video was shared 87 times before being taken down. 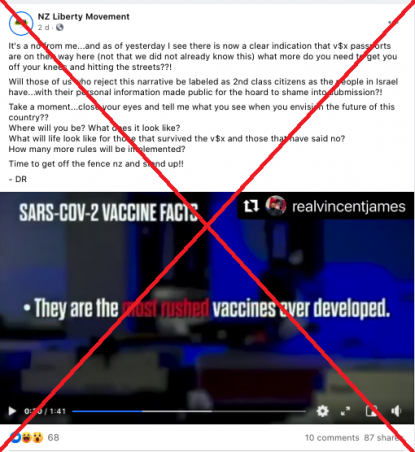 The anti-vaccination video claims Bill Gates has a financial stake in the new Covid-19 vaccines and that governments are being “bribed by the international health cartel to purchase these vaccines”.

It then goes on to list some “indisputable” facts about Covid-19 vaccines, including:

The caption of the Facebook post goes on to ask if people will become “2nd class citizens” if they refuse the vaccine in New Zealand.

The claims were also shared here by a former New Zealand Public Party candidate, Claire Deeks, and other users from around the world, see here and here.

AFP has debunked claims from the former head of the New Zealand Public Party, Billy Te Kahika, and the party he was briefly allied with, Advance New Zealand.

The claims made in the video posted to Facebook, however, are a combination of missing context and misleading according to experts.

Covid vaccines developed in record time due to investment

University of Queensland immunologist Dr Larisa Labzin told AFP in an interview that Covid-19 vaccines have been developed in record breaking time governments invested a lot of money to help them develop through the trial phases.

“A lot of governments really invested a lot of money… to ramp up production so there were no gaps in between phases [of the vaccine trials],” they said.

“While the pre-clinical trials were running, they were already starting to set up for the phase one, two and three clinical trials. So what that says is, they were thinking ‘let’s assume these trials work, what do we need to do to not waste time’,” Dr Labzin said.

Dr Helen Petoussis-Harris, vaccinologist from the University of Auckland told AFP in a March 16 email the claim is misleading because “it gives the impression there was a lack of diligence” in creating the Covid-19 vaccines.

“COVID-19 vaccines have been developed with unprecedented speed thanks to substantial funding and collaboration. All steps and processes associated with vaccine development and testing have been followed and assessed closely by regulatory agencies all over the world,” she said.

Ongoing monitoring of Covid vaccines is important for safety reasons

Trials for the Pfizer and AstraZeneca Covid-19 mRNA vaccinations are ongoing, with the Pfizer trials set to “collect efficacy and safety data in participants for an additional two years”, according to this release on their website.

However, long term safety and efficacy trials normally continue, sometimes for decades, after vaccines have been rolled out, said Dr Petoussis-Harris.

According to Dr Labzin, ongoing monitoring of trial participants help scientists gather more data on the vaccine's efficacy, indications of long-term effects and how long the vaccine is protective for.

“Basically it’s just scientists continuing to monitor whether the vaccine is safe, effective and how it works with rarer conditions that might not have come up in clinical trials.”

The roll-out of the vaccine is an important part of understanding how effective the vaccine is in a real world setting including testing countries public health measures and monitoring the virus spread among age groups, Dr Labzin explained.

“All those types of real-world variables that will influence how sick people will get, which you have to take into account when people get a vaccine, but are really difficult to test during a smaller clinical trial,” she said.

mRNA vaccines have been rigorously tested and are safe

Dr Petousis-Harris pointed out mRNA vaccines aren’t actually new, the technology has been around “for many years and there are numerous studies in humans”.

According to this article from the Harvard Medical School, mRNA vaccines were first thought up about 30 years ago.

mRNA vaccines have been studied for use against influenza, Zika virus, rabies and cytomegalovirus, states the US Centre for Disease Control.

“As soon as the necessary information about the virus that causes COVID-19 was available, scientists began designing the mRNA instructions for cells to build the unique spike protein into an mRNA vaccine”, this CDC web page explains.

Dr Labzin also told AFP that if we were to stop the roll-out of every new medicine or vaccine based on the fact that it’s new, “then we’d still have a lot of disease”.

The coronavirus vaccines were not tested for their ability to prevent infection or spread of SARS-CoV-2 because researchers wanted to work out first and foremost if they would stop people experiencing the disease known as Covid-19, according to Dr Labzin.

“If coronavirus infected us, replicated and transmitted on, but we didn’t get sick from it to be honest we wouldn’t really care. The problem is that it makes us really sick, so the first thing the vaccine has to do is to stop us getting really sick, so that’s what they were measuring it in clinical trials,” Dr Labzin said.

It’s also more effective to test a vaccine's ability to prevent transmission after it’s been deployed, because it can be measured in real world populations after the vaccine is being used in those populations, Dr Petousis-Harris told AFP.

“The emerging data so far indicates that the vaccines are able to prevent both infection and spread, in line with pre-clinical data,” Dr Petoussis-Harris said.

However, the paper showing the Oxford/AstraZeneca vaccine reduces transmission has not been peer reviewed leaving the test results as still preliminary findings, according to this Australian Broadcasting Corporation (ABC) report.