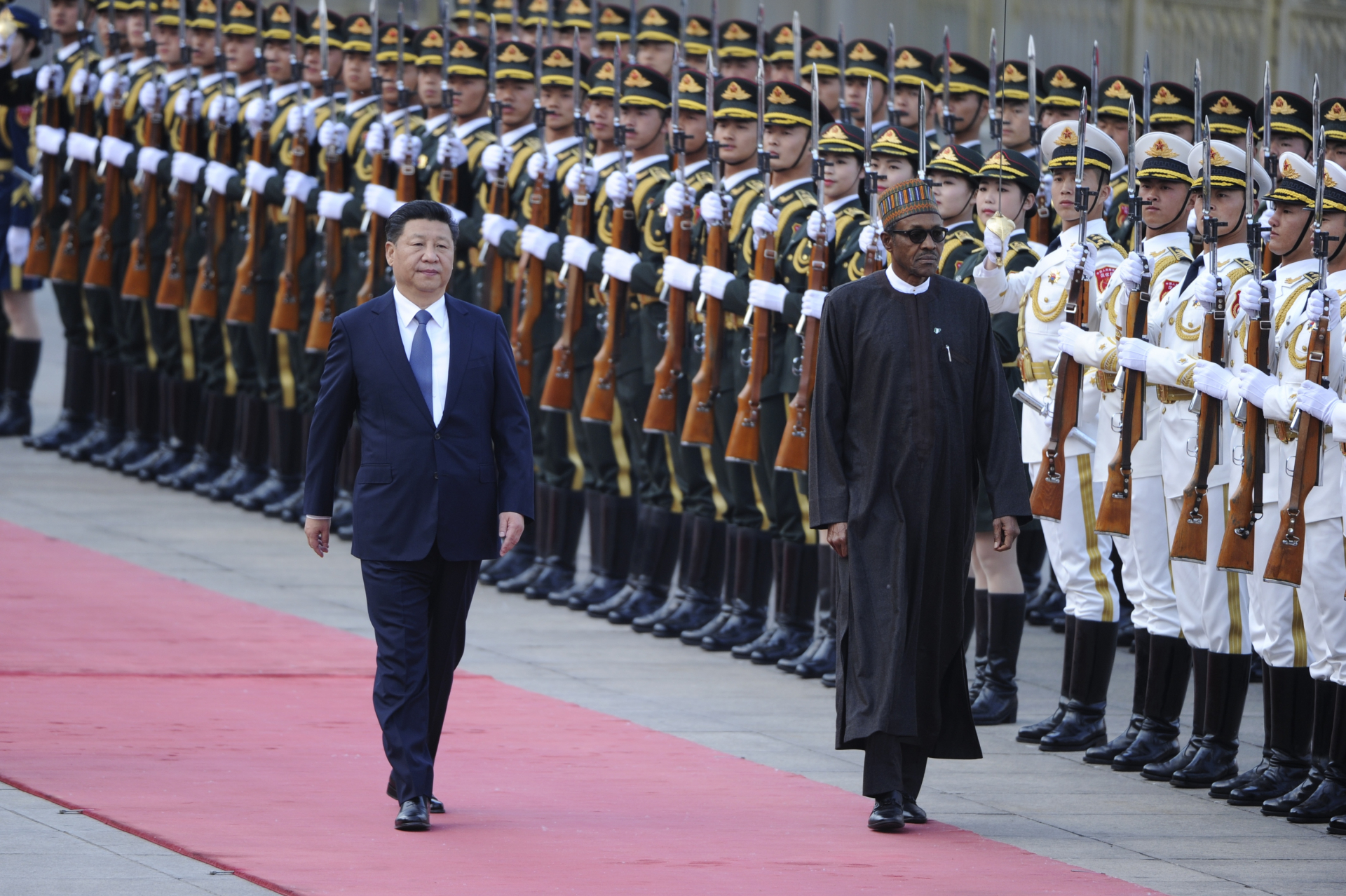 Nigerian President Muhammadu Buhari (R) and his Chinese counterpart Xi Jinping inspect Chinese honour guards during a welcome ceremony outside the Great Hall of the People in Beijing on April 12, 2016. (Photo by Wang ZHAO / AFP)

Analysis piece from 2018 sparks misinformation about Nigeria's debt to China

Nigeria's growing debt to China has sparked a wave of misinformation about how much money the country owes Beijing. A viral Instagram post made several claims, including that Nigeria had borrowed 3 trillion naira ($7.9 billion). But the allegations are inaccurate and a recycled version of an old Facebook post. The claims are most likely based on misleading figures in an analysis piece published by Nigeria's International Centre for Investigative Reporting in 2018.

Africa's largest economy is facing growing debt to fund key projects following a recession in 2016. But the loans have sparked controversy as Nigeria's Chinese debt has more than doubled in the past four years, with critics accusing the government of selling the country to Beijing. 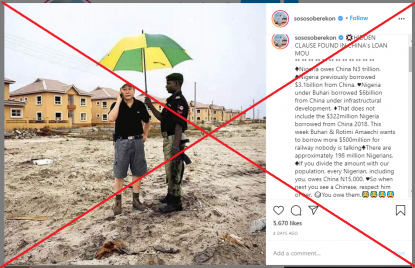 A screenshot taken on August 7, 2020, showing one of the misleading posts

They included an allegation that Nigeria's President Muhammadu Buhari had borrowed $6 billion from China for infrastructure projects.

The post went viral after renowned Nigerian entertainer Tunde Ednut reposted it to his 2.4 million followers on the social network. It had received more than 50,000 likes by August 8, 2020.

The post was also republished on several news sites, including Akelicious and Ab-tc -- both known for spreading misinformation in Nigeria -- and reshared as a screenshot on WhatsApp. 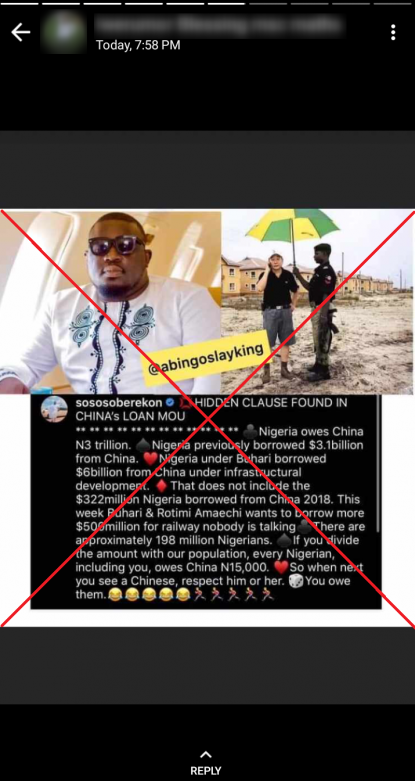 A screenshot taken on August 2, 2020, showing the post on WhatsApp

Soberekon's post was published on the same day as national media reported that Nigerian lawmakers had expressed concern over a loan agreement worth $328 million signed between Nigeria and China.

AFP Fact Check found a near-identical version of the claims published on Facebook in 2018 when President Buhari visited Beijing in China. The post was shared nearly 2,000 times. 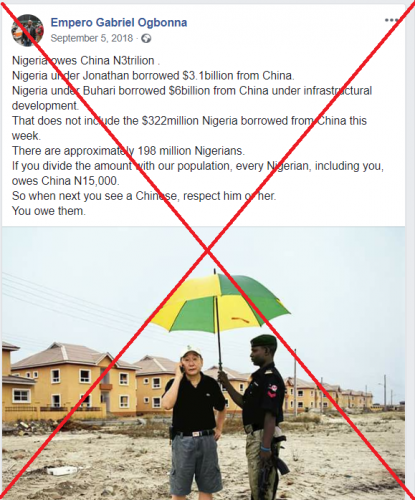 The claims appear to be based on an analysis piece published by the International Centre for Investigative Reporting (ICIR) on September 4, 2018. It alleged that every Nigerian owed China 15,000 naira ($40).

The report was picked up the next day by Nigerian daily newspaper Daily Trust. However, AFP Fact Check found that the ICIR piece makes a series of misleading or false assertions.

Although Nigeria is indebted to China, the amounts have been exaggerated.

In September 2018, when ICIR published its report, Nigeria owed the Chinese EXIM Bank $1.9 billion, which equates to 585 billion naira when converted to Nigeria’s local currency.

Even though the outstanding debt rose to $3.1 billion (1.1 trillion naira) in March 2020, it remains much lower than the claimed 3 trillion naira ($7.7 billion).

AFP Fact Check found that Nigeria's Chinese debt exceeded $3 billion for the first time in 2019, as shown in the table below. 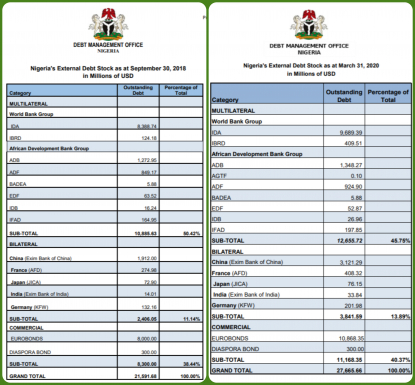 Available records from the state-owned debt agency show $3.1 billion is equivalent to the sum of outstanding loans Nigeria obtained from the Chinese Exim Bank as of March 31, 2020.

Recent social media posts, including this one on Facebook, claim that Nigeria has borrowed $6 billion from China since Buhari’s presidency began in 2015.

It matches a claim in the ICIR piece, which alleges that “the debt comes from two huge tranches of aid from China: $3.1 billion in 2014 and $6 billion for infrastructure in the last three years”.

But AFP Fact Check found that Nigeria neither borrowed $3.1 billion in 2014 from China under then-president Goodluck Jonathan nor accumulated $6 billion in debt since Buhari took power.

According to Nigeria’s debt agency, China has disbursed a total of $3.3 billion in loans to Nigeria, including $2.59 billion lent to the African country since 2015. 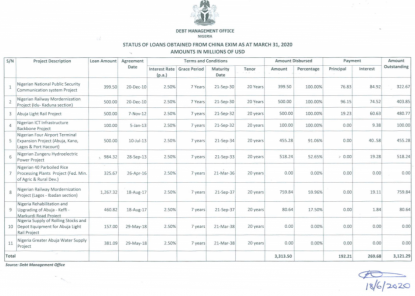 A screenshot taken on August 7, 2020, showing Chinese loans to Nigeria

Official records and a Chinese-loans-to-Africa database by researchers at Johns Hopkins University also provide no evidence that Nigeria received a loan from China in 2014.

AFP Fact Check found no public evidence to support the claim that Nigeria had borrowed $322 million from China in 2018.

Although Nigeria agreed to some loan deals with the Exim Bank of China in 2018, official records reveal none of the proposed borrowings had been disbursed as of March 31, 2020.

Contacted by AFP Fact Check, the author of the 2018 ICIR report acknowledged his findings were not based on official figures but a news story stating that China had offered Nigeria $6 billion. The story did not mention that Nigeria had accepted the money.

"I didn't check the website of the Debt Management Office (DMO) to find out," Theophilus Abbah said. "I quoted the figures from previous research I conducted."

The DMO, Nigeria's national debt agency, dismissed the claims in 2018 and again in 2020.

AFP Fact Check has debunked several claims about Nigerian debt, including the country clearing all its external obligations in 2007 and piling up $70 billion in debt in five years.

The latest debate was sparked in late July when MPs discovered a clause in a 2018 loan agreement that allegedly concedes Nigeria's sovereignty to China in case of default on repayment.

Please and please, Help me beg Nigeria Government not to sell us to China because of their selfish interests.https://t.co/j0BsxctbWl

However, legal analysts and government officials have rejected the accusation as baseless.

“These kinds of clauses are standard when entering into a contract with a government or government agency,” Ilias Kazeem, a partner at Lagos-based law firm Sholias Legal Practitioners, told AFP Fact Check.

Transport Minister Rotimi Amaechi said Nigeria only agreed that China could recover the borrowings in the case of a default by taking back or selling Nigeria’s assets that were laid down as guarantees in the loan contract.

“What you do is, you give a sovereign guarantee and that guarantee is the immunity clause they are talking about,” Amaechi said in a television broadcast on July 31, 2020. “They are saying if you are not able to pay, don’t stop us from taking back those items that will make us recover our funds.”

“The  Chinese can never... become president or minister. And if the assets you put down become depreciated, then you negotiate which assets they can go after. Chinese will never take over what was not constructed with the loan.”