Not all of Nigeria’s external borrowings were paid off in 2007, as claimed, and neither was it totally debt free

Opposition politicians in Nigeria have made a series of claims about the country’s debt record, including that the country had paid off all its external debt in 2007, while criticising the current government of President Muhammadu Buhari for increasing borrowing. AFP has found some of these assertions contain false or misleading claims.

Former Aviation Minister Femi Fani-Kayode in a Twitter post shared hundreds of times, claimed Nigeria owed its foreign creditors $81.274 billion in 2019, despite being “debt free” in 2007 after all its external loans were “paid off”.

But Nigeria's debt records show the country still owed external lenders $3.65 billion in 2007. And, while the country’s debt has now indeed grown dramatically under Buhari, not all of it is owed abroad. 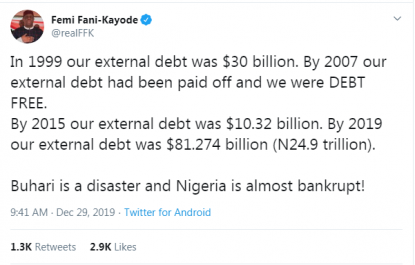 (A screenshot of a misleading tweet taken on January 2, 2019)

Fani-Kayode, who was handed the culture and aviation portfolios under President Olusegun Obasanjo in 2006, has been a well-known critic of Buhari’s administration since he ended 16 years of rule by the People’s Democratic Party (PDP) in 2015.

His post, which also appeared on Facebook here and here, has been shared more than 1,300 times and liked 2,800 times since it was posted on 29 December 2019.

Since winning a second term at elections in February 2019, Buhari’s administration has renewed plans to borrow an additional $29.96 billion which it insists is “critical to the delivery of the Government’s policies and programmes relating to power, mining, roads, agriculture, health, water and educational sectors”.

Local and international organisations have voiced concerns here, here and here about the administration’s borrowing spree that came as lower oil prices in the international market weakened the revenue of Africa’s largest oil producer.

Fani-Kayode’s claims have been echoed by several of his former government colleagues.

Former PDP presidential challenger Atiku Abubakar, who was vice president under Obasanjo, claimed in a Facebook post shared 940 times and liked more than 1,300 times that he chaired a council that “paid off Nigeria's entire debt” in 2006. We’ve archived the post here.

In November, former central bank deputy governor Obadiah Mailafia claimed in a video interview that the country was exposed to less than $7 billion of debt in 2015 and now faced a “staggering” $84 billion bill.

Obasanjo also weighed in in a speech in Lagos in late December as he slammed the current level of debt and warned of major consequences. “In four short years by March 2019, our external debt grew to N24.947 trillion or $81.274 billion. To service this current level of indebtedness, we must commit at least 50 percent of our foreign earnings. Such a situation talks about an impending bankruptcy,” the former president said.

What is it about Nigeria’s debt?

Since 2006, successive governments in Nigeria have continued to increase the country’s debt both locally and internationally to plug its large infrastructure gap, making the nation spend more than half of its revenue on debt servicing and leaving a smaller chunk for capital investment in critical sectors.

The government, however, says it is comfortable with the ratio of the country’s total public debt to its gross domestic product, which stood at 18.99 percent in June 2019. “There is yet no cause for alarm,” the government said in an end-of-the-year statement. “This is because Nigeria has a debt ceiling of 25% in the total public debt stock to Gross Domestic Product (Debt/GDP), which it has operated within.”

AFP’s compilation of Nigeria’s debt records from the state’s debt agency shows that the country owed $28.04 billion to external sources in 1999; out of which 73 percent ($20.5 billion) was owed to Paris Club of creditors, a grouping of more than a dozen developed nations.

In addition to the external borrowing, Nigeria’s domestic debt has grown to $56.72 billion, bringing the total public debt of Africa’s most populous nation - comprising debt of the Federal Government of Nigeria (FGN), the 36 States of the Federation and the Federal Capital Territory (FCT) - to $83.88 billion in June 2019.

If we take a look at the Buhari administration’s record, we see that in June 2015 -- a month after he assumed office -- Nigeria’s total borrowing was $63.81 billion and by June 2019 it had grown to $83.88 billion. This implies the country’s debt pile increased by almost a third ($20 billion) in dollar terms under Buhari’s administration.

While the government agrees that the country’s debt has grown to $83.88 billion, made up of $27.163 billion in external debt and $56.72 billion owed domestically, it points to currency fluctuations for the varying accounts of Nigeria’s debt.