No, it is a Chinese rocket doctored with the Ethiopian flag

An image of a rocket bearing the Ethiopian flag was used in several social media posts marking the launch of the country’s first satellite into space last month. The event was acclaimed throughout the east African nation and marked a big step in Ethiopia’s fledgling space program, but the picture that was carried with many of the stories was a manipulated image of a Chinese rocket from 2016.

The image was shared here, here, here and here. News websites also picked up the story and you can see archived links to their coverage here, here and here. All of them published the picture below, showing a white rocket with the Ethiopian flag near the top and on the launch platform beneath the burners. “Ethiopia” is inscribed about midway up the rocket.

The rocket is, in fact, Chinese and was launched in 2016. A different type of Chinese rocket was used to put Ethiopia’s satellite into space.

Deputy Prime Minister Demeke Mekonnen also shared the wrong image on his official Facebook page after attending a live broadcast of the satellite launch, which took place on 20 December 2019 in China, about 7,000km (4,350 miles) away.

Mekonnen and other dignitaries from both countries watched from the Ethiopian space control center outside Addis Ababa, as described in this AFP report, which also contains details of the rocket that was used.

A rough translation from Mekonnen’s Facebook post reads: “The launch of our first satellite into space is a historical step that shows that we, Ethiopians, are not afraid of the darkness but rather thirsty for brightness.”

In an email to AFP, she said: “It is obvious that the rocket is not ours [Ethiopia's], I took it as a reflection or expression of people's hope and dreams for the future Ethiopian space program. I don't think whoever did it wanted to claim the rocket is Ethiopian.”

This YouTube video, with a screenshot below, shows the real rocket taking Ethiopia’s satellite into orbit. 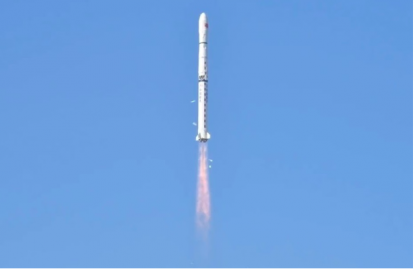 It is a Long March 4B rocket and took off from the Taiyuan space base, unlike the Long March 5 or Changzheng 5 in the doctored image, which is launched from Wengchang, located on the island of Hannan in south-west China.

AFP ran a Yandex image search of the manipulated picture and found the original rocket with the Chinese flag. 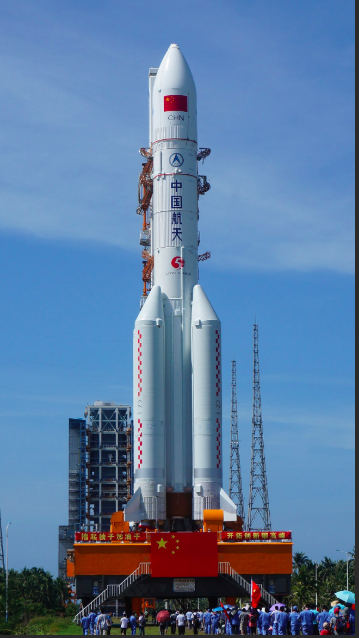 Another clue that something is amiss is the two-dimensional appearance of the Ethiopian flag. The letters spelling out Ethiopia also look flattened compared to the original Chinese inscription 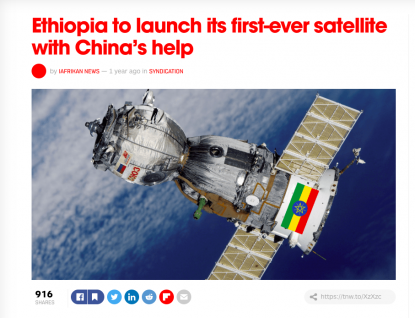 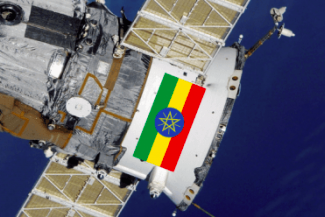 (Close-up of screenshot above)

We ran a Yandex search and found not only is the Ethiopian flag once again added to the picture, but the “satellite” in shot is, in fact, the Russian spacecraft Soyuz TMA-7, which was launched on 1 October 2005.

The picture was taken from the International Space Station (ISS). 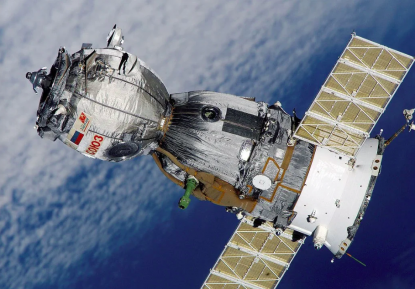 Soyuz TMA-7 was a transport mission to the International Space Station carrying two astronauts -- ISS Commander William McArthur and ISS Flight Engineer Valery Tokarev, along with Gregory Olson, an entrepreneur who fully funded his visit to space with the help of space tourism company, Space Adventures.

The real satellite, pictured below, is called ETRSS-1 and will be controlled from the Entoto Observatory and Research Center, located in Ethiopia’s highlands north of the capital Addis Ababa. 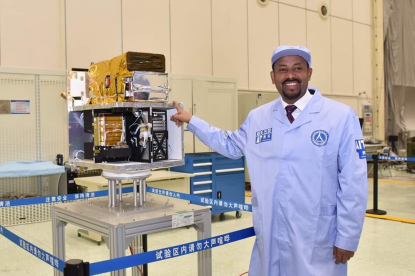 The observatory was opened in 2015, with most of the project funded by Ethiopian billionaire, Sheik Mohammed Al Amoudi. It made Ethiopia the only east-African nation to have developed its own observatory.

A year later, the country became the 11th African nation to establish a space program under the banner of the Ethiopia Space Science & Technology Institute (ESSTI).

According to AFP’s report, the 70-kilogram (154-pound) satellite was developed by the Chinese Academy of Space Technology, along with 21 Ethiopian scientists for the purpose of gathering data on the environment and weather patterns in the Horn of Africa.

Tesfay, from the ESSS, said the satellite will have a great impact on “creating a capacity to develop a capability to transform our country's developmental sectors such as agriculture to yield better production using timely and relevant data acquired from the satellite”

“Also, it will serve as a base, a starting point for future satellite project development.”