The figure shows debt built up over successive governments

Facebook and Twitter posts shared hundreds of times claim that Nigeria’s ruling party has piled up 27 trillion naira ($70 billion) in debt since it came to power in 2015. This is false; the figure includes debt accumulated by a previous government.

Popular Nigerian activist Deji Adeyanju published the claim on his Facebook page -- which has more than 260,000 followers -- and also on Twitter.

He said that Nigeria’s ruling All Progressives Congress (APC) has borrowed 27 trillion naira over the past five years. He compares this to 10.6 trillion naira ($27 billion) borrowed by the opposition People's Democratic Party (PDP) during their 16-year rule from 1999 to 2015. 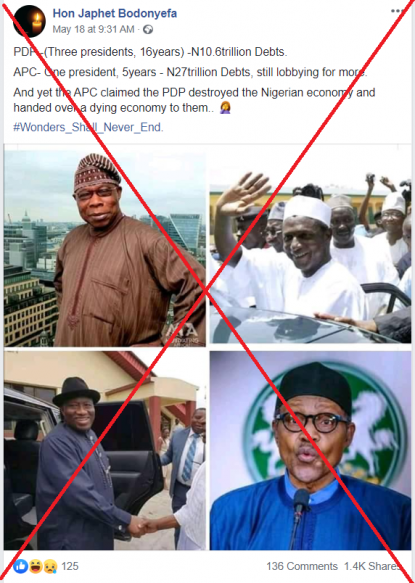 Africa's largest economy is facing growing debt costs as it has turned to local and overseas lenders to fund key projects following a recession in 2016.

How much debt did Nigeria owe under PDP?

According to government figures, Nigeria’s total public debt -- including local and international borrowing by the federal and state governments -- stood at 12.1 trillion naira ($30 billion) in June 2015, a month after the APC's Muhammadu Buhari took over as president from the PDP's Goodluck Jonathan. The figure exceeds the 10.6 trillion naira of debt Adeyanju attributed to PDP governments.

On top of the 12.1 trillion in debt the APC inherited from the PDP in 2015, the APC had increased borrowing to 27.4 trillion naira by December 2019, as shown in the table below. 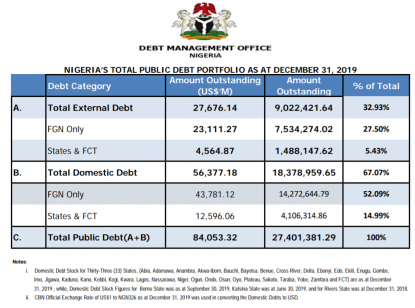 While the 27.4 trillion naira is actually the total outstanding debt accumulated by successive administrations in Nigeria as of December 2019, the APC government alone had borrowed 15.3 trillion naira -- more than half of the country's total debt -- in nearly five years.

AFP Fact Check has previously debunked claims that Nigeria paid off all its debts in 2007.