The emir's funeral was conducted privately, unlike this footage from another burial

A video viewed tens of thousands of times in multiple Facebook, Twitter and Instagram posts claims to show a crowd surrounding, and attempting to touch, the remains of the Emir of Rano, a Nigerian traditional ruler who died on Saturday. However, authorities say the video is “fake” and that the emir was buried in a private ceremony.

The video appears in numerous social media posts in Nigeria, including a tweet shared more than 700 times since May 2, 2020. It has since been deleted, but AFP archived it here.

The short video clip shows what appears to be a corpse wrapped in white cloth and lifted above a surrounding crowd who attempt to touch the body. 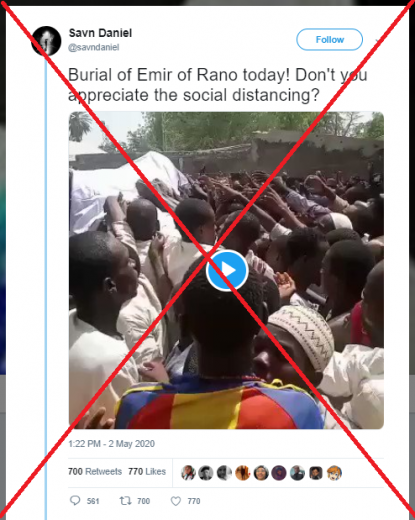 A screenshot taken on May 2, 2020, showing the misleading tweet

“Burial of Emir of Rano today! Don't you appreciate the social distancing? (sic)” the caption reads. It refers to a disregard for government directives on social distancing aimed at reducing the risk of the spread of coronavirus.

The Emir of Kano was traditionally one of Nigeria’s most important Islamic leaders until the kingdom was carved up last May to create four new emirs, including the Emir of Rano, in a bid to curb the influence of the powerful post.

On May 2, 2020, Nigerian media reported that the Emir of Rano, Alhaji Tafida Abubakar Ila, died after a brief illness. It happened amid a surge in deaths in Kano which local investigators attributed to coronavirus. A screenshot taken on May 4, 2020, showing Daily Trust’s report

At least 365 people have contracted coronavirus in Kano, making it the second worst-hit city in Nigeria, after Lagos. The two cities account for more than half of the country's 2,802 COVID-19 cases, as of May 4, 2020.

Nine cases previously announced as discharged cases, were reported in error. Therefore, there are 417 cases that have been discharged

One case reported in Nasarawa was a repeat test. The state has a total of 11 confirmed caseshttps://t.co/Z5x7UFXpXd pic.twitter.com/yKYwuQ9djm

Nigerian President Muhammadu Buhari’s personal assistant Bashir Ahmed said the video was “fake”. In a tweet, he said that Rano Emirate officials told him that “less than 20 people” buried the late emir in his palace, as opposed to the scenes in the viral clips showing hundreds of people.

The remains of late Emir of Rano buried inside his Palace approximately an hour ago, with less than 20 people attended the burial, but a fake video of thousands people has been trending throughout the day, purported to be his burial, it was not, Rano Emirate official told me.

AFP’s correspondent in Borno said he recognised the video from the burial prayer for prominent Islamic cleric Goni Modu Goni Kolo in the north-eastern state's capital Maiduguri on May 2, 2020. The cleric died the day before, in the early morning hours.

Photojournalist Audu Marte attended the ceremony and took photographs that contain similar visual clues to the footage, including a building with arches and barred windows. Screenshots taken on May 5, 2020, showing the late cleric's residence

He also confirmed the language in the video is Kanuri, predominantly spoken in Maiduguri, whereas the language most widely spoken in Kano -- where the Emir of Rano’s burial took place -- is Hausa.

“Step back!” someone from the crowd says in Kanuri.

If you can help us confirm the location of the video, please get in touch here.