No, these pictures do not show weapons from France going to Boko Haram insurgents in Nigeria

Two pictures have been shared hundreds of times on Twitter, Facebook and WhatsApp alongside a claim that they show a container full of illegal firearms sent from France to Nigerian Islamist group Boko Haram. In fact, the firearms were found by Nigerian customs officials on 23 May, 2017 when they intercepted a container from Turkey loaded with about 440 pump action rifles, one of several such shipments seized that year.

The pictures appeared here on Twitter with the false claim on 22 December, 2019. The tweet, since deleted but archived by AFP (see below), was  retweeted more than 800 times. 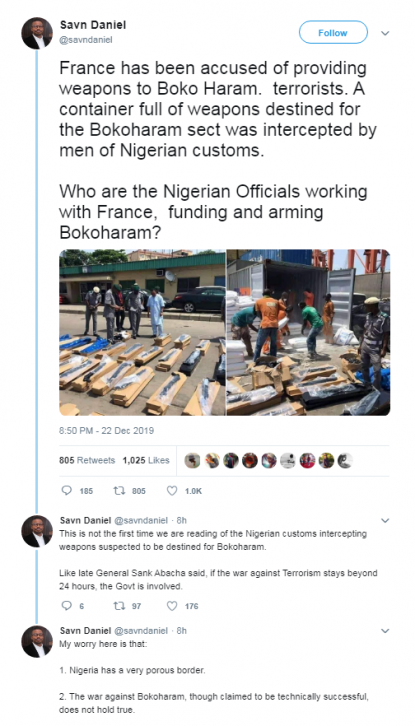 A screenshot of a misleading tweet taken on December 30, 2019

“France has been accused of providing weapons to Boko Haram terrorists,” the tweet reads. “A container full of weapons destined for the Bokoharam sect was intercepted by men of Nigerian customs. Who are the Nigerian Officials working with France, funding and arming Bokoharam?”

Boko Haram, which loosely translates as “Western education is banned”, wants to create a hardline Islamic state. Over the past decade the violence has spilled from Nigeria into Niger, Cameroon and Chad. The decade-long conflict has killed 36,000 people and displaced around two million from their homes, according to the United Nations.

In the most recent attack, the jihadists killed seven people in a Christian village in Borno State -- see this AFP report for more.

AFP searched for other instances of the claim about French weapons, and found that Savn Daniel, who posted the now-deleted tweet, had also shared it on Facebook. 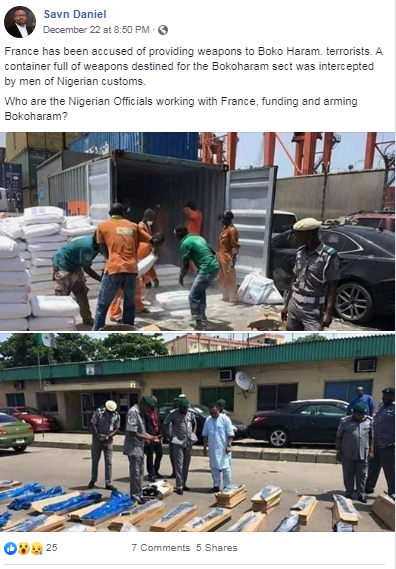 What do the pictures actually show?

One image shows workers emptying the container in which the illegal weapons had been concealed and falsely declared as plaster of Paris, before the consignment was intercepted in May 2017 at Tin Can Island port in Lagos, one of Nigeria’s busiest seaports.

The pictures were taken during a media briefing organised by customs officials, the details of which were contained in a statement from the Nigeria Customs Service and widely reported on by Nigerian media outlets, including here, here and here.

Media reports about the discovery of the shipment, which had come from Turkey, made no reference to France. In this video showing customs employees displaying the weapons, Comptroller Yusuf Bashir says that some of the rifles were from “the United States of America and Italy, but mainly imported from Turkey”.

A closer look at the video reveals some similarities, indicated with red arrows, between a screenshot of the footage and one of the photographs. 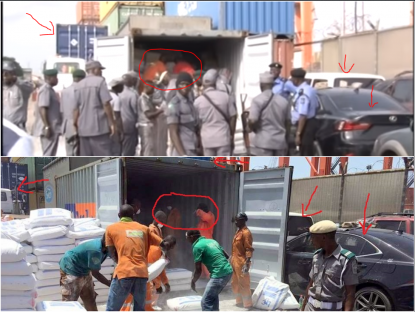 Gun smuggling into Nigeria is a major problem, despite government efforts to curtail the illegal trade. The porous nature of Nigeria’s borders is not helping the West African country as it now accounts for about 70 percent of the illegal small arms in the region.

Two years ago, AFP reported that a total of 2,671 pump-action rifles from Turkey were seized at Nigerian ports on four separate occasions within the first nine months of 2017. The figure included the stash mentioned in this report.

We've found some of the other pictures of the stash released by Nigerian customs circulating in this Facebook post alongside another false claim -- this time that the firearms were imported from France and destined for Kidal in northern Mali, but were seized in Burkina Faso.

The latest false claim also harks back to a similar hoax widely shared on social media last year which talked about the Cameroonian army intercepting a French helicopter delivering weapons to Boko Haram.

But this AFP fact-checking report shows the 2018 story was based on a picture of a Cameroonian helicopter taken during a joint training exercise between US and Cameroonian troops on 18 March, 2014.