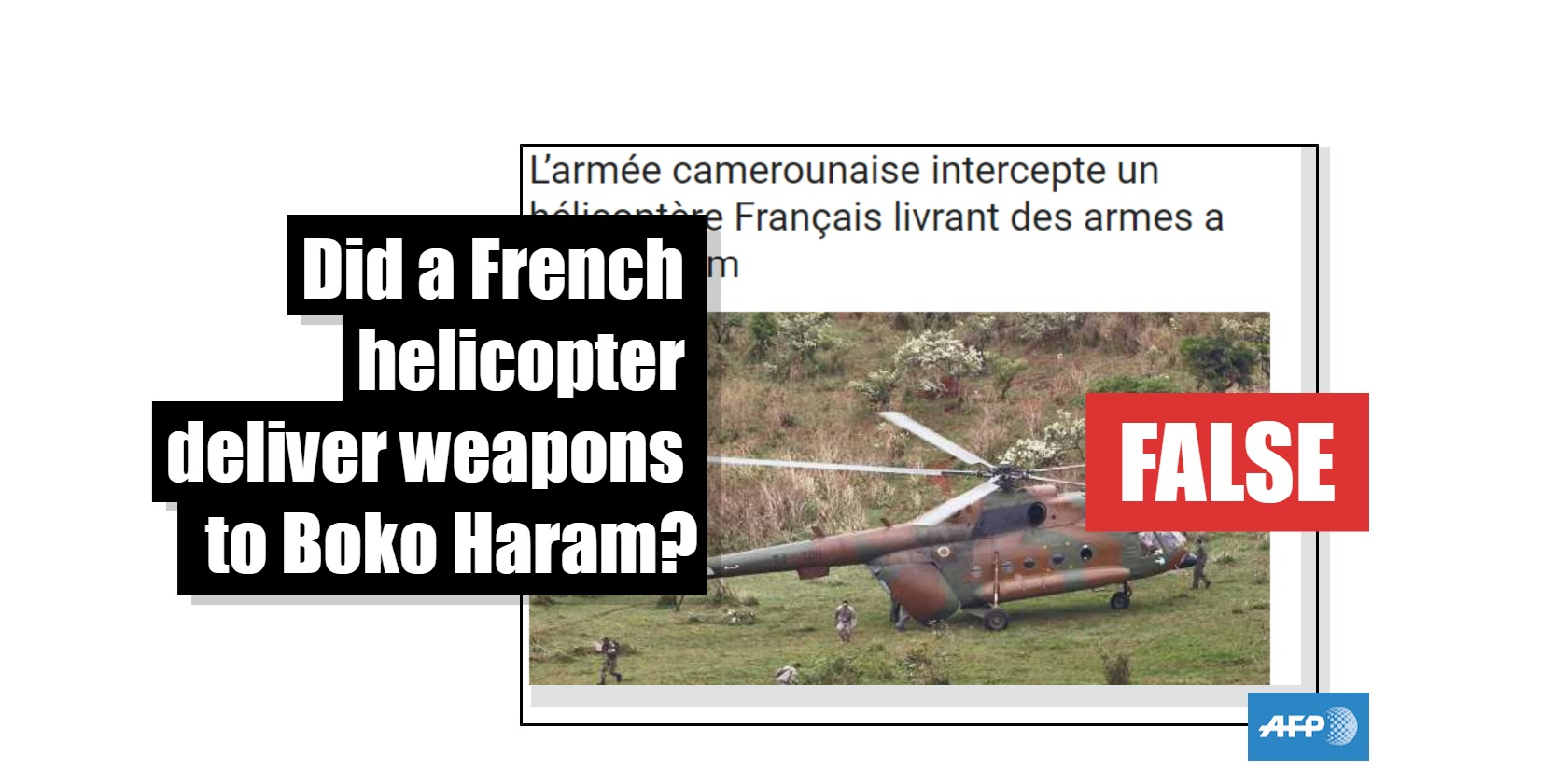 No, a French helicopter did not deliver weapons to Boko Haram

A claim that began on Facebook in 2015 and has been widely circulated on websites in French-speaking Africa states that Cameroon’s army intercepted a French helicopter delivering weapons to the Boko Haram jihadist group. But the story is based on a picture of a Cameroonian helicopter displayed on the Wikipedia page of the country’s air force.

An article with the headline “Cameroon’s army intercepts a French helicopter delivering weapons to Boko Haram” published on the Africa24.info website on December 31, 2015 has been shared online nearly 10,000 times, according to the social media monitoring platform CrowdTangle.

The article claimed that a French helicopter carrying “weapons, ammunition and dollars” bound for Boko Haram was intercepted in the country’s north.

It also said that two “French terrorists” with explosives were arrested in Cameroon’s capital Yaounde.

The story has since been reproduced by dozens of websites in Cameroon and throughout francophone Africa, including Chad, Senegal and the Democratic Republic of Congo.

It has also been published on several Cameroonian blogs in English, like here and here. 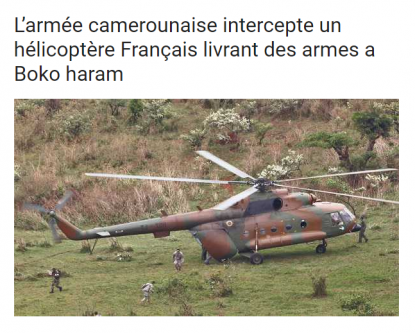 The picture of what was claimed to be a French helicopter on the Africa24.info website

The story was illustrated with a picture of what was claimed to be the French helicopter. But looking closely at the image, the letters “TJ” can be seen on the helicopter’s tail -- TJ is Cameroon’s nationality mark according to the International Civil Aviation Organization.

A reverse image search on Russia’s Yandex search engine revealed that the picture is on the English Wikipedia page of Cameroon’s Air Force.

The Wikipedia page said the photo was taken during a joint training exercise between US and Cameroon troops on March 18, 2014.

The original picture can be seen on the website of the US army’s Defense Visual Information Distribution Service (DVIDS), which said it was taken in Cameroon’s northwestern Koutaba area. The US army has confirmed the context in which the photo was taken.

Searching for the words “helicopter interception Boko Haram” in all Facebook posts from January 1 to December 1, 2015 using the WhoPostedWhat tool, the first reference to the rumour is on the Africa Media page on July 26, 2015.

Nearly half a million Facebook users follow the Africa Media page, which has published posts linking vaccines to autism -- which has been thoroughly debunked by fact-checking sites -- as well as a hoax about the Catholic Church and sexist memes.

The 2015 post said that “two French terrorists” equipped with explosives were arrested in the predominantly Muslim neighbourhood of Briqueterie in Yaounde.

Several Cameroon media outlets, including Camer.be, reported that two suspected “Western-type terrorists” were arrested in Briqueterie on July 25, 2015 -- the day before the Africa Media post.

However on July 26, numerous Cameroon media outlets reported that in fact a single Western journalist had been “spotted by residents with a very strong Muslim faith while taking photos and reported him to the police”.

According to Camernews.com, the journalist was taking photos for a documentary before his arrest. After a “thorough search followed by an interrogation” he was released.