Skip to main content
A body is moved from a refrigeration truck serving as a temporary morgue to a vehicle at the Brooklyn Hospital Center on April 8, 2020 in New York. (AFP / Bryan R. Smith)

A video has been shared repeatedly on Facebook and Twitter in April 2020 alongside a claim it shows corpses in body bags at an apartment that is home to a New York-based Islamic group. The posts claim the victims died in the apartment after contracting the novel coronavirus because they ignored social distancing rules. The claims are misleading; the footage in fact shows body bags at an Islamic funeral home in New York during the coronavirus pandemic; a spokesperson for the mortuary told AFP that the deceased were people of many faiths. 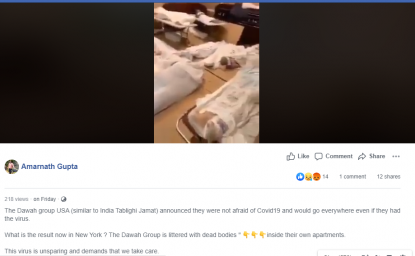 The post's cation reads: “The Dawah group USA (similar to India Tablighi Jamat) announced they were not afraid of Covid19 and would go everywhere even if they had the virus. What is the result now in New York ? The Dawah Group is littered with dead bodies inside their own apartments. This virus is unsparing and demands that we take care.”

The term Dawah is defined as “the practice or policy of conveying the message of Islam to non-Muslims” in the Collins Dictionary. There is no single "Dawah Group" in the US.

“India Tablighi Jamat” is a reference to a gathering that Tablighi Jamaat, an Islamic revivalist movement, organised in Delhi in March 2020. The event was identified as a COVID-19 hotspot after being linked to dozens of infections and several deaths, AFP reported.

The footage in fact shows body bags at the Islamic International Funeral Services, a mortuary in Brooklyn that offers Islamic funeral services.

At the video's three-minute 15-second mark, two phone numbers can be seen on the front window that match the numbers listed on the company's website.

Below is a screenshot of the video showing the phone numbers: 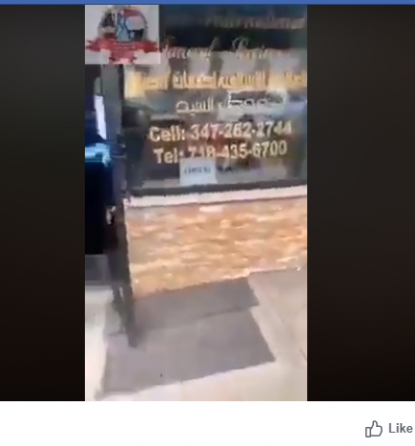 A spokesperson for the Islamic International Funeral Services told AFP the video was recorded inside its premises.

“Yes, this video is from our Islamic funeral centre but the dead bodies kept inside are COVID-19 victims from all the religions, including Chritianity, Hindu and Sikh," the spokesperson told AFP by phone on April 29, 2020.

"I have kept these bodies of the COVID-19 victims irrespective of their religion in the wake of rising death tolls due to the pandemic.”

A separate keyword search also found that the Islamic International Funeral Services was featured in this YouTube video published by Ruptly, a German-based news agency which is part of the Russian-government funded news network RT.

The video, titled: “USA: Funeral services overwhelmed as coronavirus deaths top 4,000 in NYC”, shows the same front window of the funeral home and details the issue of overloaded mortuaries due to COVID-19.

The video's caption reads in part: “Footage shows vans arriving and leaving Schaefer Funeral Home and Islamic International Funeral Services in Brooklyn, with signs outside the building reading, "Due to the coronavirus there is absolutely no families allowed in the building. We are more than happy to serve you by phone, we apologise for any inconvenience.”